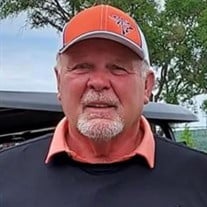 Lee Hansen’s last day here was just like he would have wanted, spending time with Deb and golfing with great friends (even winning the tournament!) At the age of 72, Lee passed away suddenly on the golf course, Saturday afternoon, June 4, 2022. He joins his daughter Angela Leigh, and his parents in God’s care. Lee was born January 1, 1950 in Tyndall, South Dakota, the son of Gordon and Florine (Wilson) Hansen. They lived in Ponca, Nebraska until his father accepted a job in Milledgeville (1957) and then the Mt. Carroll School Districts. Lee is a 1968 graduate of the Mt. Carroll High School where he excelled in football as a quarterback, and baseball as a pitcher. He went on to pitch for the Northern Illinois University Baseball team and graduated with a degree in Physical Education in 1972. Lee helped raise two daughters, Angela and Amy. Angela preceded him to heaven on August 10, 1982 after a battle with cancer just after her eighth birthday. Lee would always say to his girls, “you have nothing to worry about when your ‘ole Dad is here.” In 1991, Lee reunited with his future bride, Deborah Jo Meador after being friends in high school. It wasn’t long before Lee was taking her to Bears games. On December 31, 1992, Lee and Deb were married and brought together two families. They celebrated over thirty years together. Lee’s work-life has been just as varied as his numerous friendships. He taught school in Thomson; sold insurance for Country Companies, Law Insurance and Allstate; sold cars at Guffey Chevrolet; managed the Southtown Terrace Group Home in Milledgeville; drove semi over-the-road for several years; and after retirement drove truck for Neumiller Farms. He coached football for the Savanna Indians 1986-1989, then later coached baseball for West Carroll in 2003. He enjoyed assisting Beaver Miller in announcing local area high school basketball games on WCCI. Lee attended the First United Methodist Church in Savanna and was a past member of Lions Club and the Savanna Park District. He was an avid Chicago Bears and NY Yankees fan. Fast-pitch softball was one of his favorite games. Twice, he was inducted into the Northern Illinois University Athletics Hall of Fame, as well as the Shoot the Bull Hall of Fame. Lee enjoyed fishing, hunting, riding his Harley, refereeing basketball, listening to MLB baseball games, wintering in Florida with Deb and hanging out with family and friends. Every time he had a good meal, played golf with buddies, went boating on the Mississippi, or played cards at the Gun Club, Lee would exclaim, “It don’t get no better than this!” He made strangers feel like friends, and friends feel like family. Lee will be missed by many. Lee is survived by his wife, Deb Hansen of Thomson; three daughters, Amy Hansen (Neal Andersen) of Bettendorf, IA, Rebecca (Ian) Brown of Dahinda, IL Denise (Roy) McGregor of Bettendorf, IA, and one son, Shane (Becky) McDearmon of Martinsville, IL; seven grandchildren, and one great-granddaughter; one brother, Robert “Bob” (Karen) Hansen of Chatham, IL; and ten siblings-in-law, Kathy (Gordon) Decker of Sterling, IL, Ellie (Larry) Miller of Chadwick, IL, Steven (Debbie) Meador of Kingston, TN, Dina (Randy) Dornink of Polo, IL, Marlie (Kevin) Folk of Milledgeville, IL, James “Henry” (Kathy) Meador of Mt Carroll, IL, Chris (Jack) Kempel of Pearl City, IL, Carol Sue (Matt) Heinrich of Lewisville, TX, Rick (Mary) Meador of Lanark, IL, and Jeff (Connie) Mersch of Crossville, TN. A funeral service will be held 10:30 am Saturday, June 11, 2022 at the First United Methodist Church in Savanna. Visitation will be held 5:00 – 8:00 pm Friday, June 10, 2022 at the Law Jones Funeral Home, Savanna. Memorials may be given in lieu of flowers for the University of Iowa Stead Family Children Hospital. Friends and family who wish to watch the livestream of the service may do so at this link, https://www.facebook.com/groups/729702198262944/?ref=share_group_link.

Lee Hansen&#8217;s last day here was just like he would have wanted, spending time with Deb and golfing with great friends (even winning the tournament!) At the age of 72, Lee passed away suddenly on the golf course, Saturday afternoon,... View Obituary & Service Information

The family of Lee Wayne Hansen created this Life Tributes page to make it easy to share your memories.

Lee Hansen’s last day here was just like he would have wanted,...

Send flowers to the Hansen family.