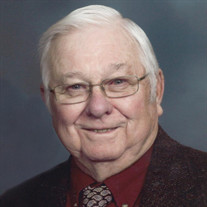 Lawrence L. Haas, age 86, of Mt. Carroll, Illinois passed after a sudden illness Thursday, June 4, 2020 at home. A private family funeral service will be held with burial in Oak Hill Cemetery, Mt. Carroll. A memorial fund has been established for autistic children, any memorials may be forwarded to 826 Dewhurst St, Mt. Carroll, IL 61053. Lawrence was born November 28, 1933 near Massbach, Illinois, the son of Henry and Lydia (Zink) Haas. He grew up learning about livestock and crops, loving the outdoors. First attending the Oakland Massbach Country School, Lawrence is a 1951 graduate of the Mt. Carroll High School. On October 7, 1956, he married Bonnie Slick. They raised two daughters and celebrated 63 years of marriage. He received training in Electrical Engineering and went on to work for Woods in Mt. Carroll and Oregon until his retirement in 1996. He always enjoyed helping his brother, Melvin on the family farm, he could fix just about anything. Lawrence enjoyed listening to WBBM Radio most every day. He also loved gardening, yardwork, and hearing about his grandchildren’s lives. He would take the time to talk with them and share his wisdom. Lawrence will be dearly missed by his wife, Bonnie of Mt. Carroll; two daughters, Karen (Cliff) Klenke of Apple River, Illinois and Dawn (Randy) Rittmeyer of Winnebago, Illinois; six grandchildren, Nicholas (Kim) Krogull, Lyndsey (Nathan) Spurlock, Sarah Kowalewski, Austin Rittmeyer, Dalton Rittmeyer and Logan Rittmeyer; two great-grandchildren, Ayla and Kali Anne; his sister, Mary Engkey of Lena, Illinois; two sisters-in-law, Vera Haas, and Gladys Striecher; and several nieces and nephews. Lawrence was preceded in death by his parent, Henry and Lydia Haas, and his two brothers, John and Melvin.

The family of Lawrence L. Haas created this Life Tributes page to make it easy to share your memories.

Send flowers to the Haas family.