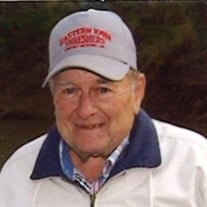 Larry L. Holdgrafer, age 79, of Spragueville, IA, passed away Saturday, January 8, 2022, at Mercy Hospital in Iowa City, IA. A funeral mass will be held at St. Joseph Catholic Church in Preston, IA, on Friday, January 14, 2022, at 11am. Visitation will be held Thursday, January 13, 2022 at the church, from 4pm to 7pm, as well as one hour prior to Friday’s mass. Family and friends are invited to share in Larry’s life at lawjonesfuneralhome.com. Larry was born October 21, 1942, in Clinton, IA, the son of Al and Florence (Franzen) Holdgrafer. He attended North Bend Country School, in the Spragueville area. On October 20, 1973, Larry married Barbara Jackson, in Sabula, IA. Larry went to work at a young age for local farmers. Into adulthood, he spent years working for Bob Diercks farm, Gene Thompson farm, as well as many others. He worked for Northwestern Railroad for nine years, and retired from National By-Products, in Clinton. He was a hard-working man and always had multiple irons in the fire, as they say. He owned and operated Holdgrafer Fencing for decades and tended to his own farm that he and Barbara bought in 1973. Larry was an ever-active guy, and even in Larry’s free time, his activities always seemed to center around his work ethic. He and Barbara would go to auctions and sale barns, and when Larry wasn’t sure how to spend his time, you could bet he was somewhere outdoors, probably cutting wood, welding, or mending fences. He also enjoyed playing cards, tractor pulls, hunting, and spending time with his grandchildren. Larry will be dearly missed by his wife, Barbara; sons, Gregg (Jennifer) Holdgrafer, of Preston, IA, Curtis (Mindy Eckelberg) Holdgrafter, of Spragueville, IA, and Daryl (Tashell Clark) Holdgrafer, of Miles, IA; daughter, Carla (John Thines) Holdgrafer, of Preston, IA; grandchildren, Gregory, Noah, Cheyanna, Pacey, and Brantley; brothers, Jerry Holdgrafer, Charles Holdgrafer, Tom (Karen) Holdgrafer, Donnie (Tina) Holdgrafer, Glenn (Pam) Holdgrafer, and Bob Holdgrafer; sister, Joyce (George) Stone; and many nieces and nephews. Larry is preceded in death by his parents, Al and Florence; brother, Michael Holdgrafer (Infant); sisters, Darlene Holdgrafer and Marilyn (Frank) Hamilton; and sister-in-law, Bev Holdgrafer.

The family of Larry L. Holdgrafer created this Life Tributes page to make it easy to share your memories.

Send flowers to the Holdgrafer family.