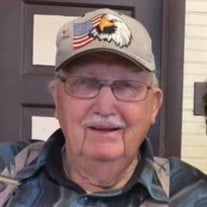 Larry Leo Helmle, age 88, a lifelong resident of Spragueville, passed away Saturday, June 18, 2022, at University of Iowa Hospital. A funeral Mass will be held 11:00 a.m., Friday, June 24, 2022, at St. Joseph Catholic Church, Preston, Iowa. Burial will be in the Spragueville Cemetery. Visitation will be held 4:00 – 7:00 p.m., Thursday, June 23, 2022, at St. Joseph Catholic Church, Preston, Iowa, and one hour prior to the service at the Church. Larry was born June 17, 1934, to Leo and Florence (Michels) Helmle above the family store in Spragueville. He attended Spragueville country school and then completed two years of high school in Preston. He then went to work for Ed Asmussen doing construction. He followed that with a short stint at the railroad along with beginning his lifelong career of farming and carpentry. After retirement at age 80, he could always find a job to do with his skid loader. Larry married Donna Eickert on July 22, 1953, at St. Joseph’s Catholic Church in Preston. She preceded him in death on July 25, 2011. Together they raised three children, Lonnie, Sheila, and Kevin. Larry and Donna enjoyed traveling the U.S, buck skinner rendezvous and attending their kid’s and grandchildren’s sporting events. In his later years, Larry enjoyed Monday night poker games, breakfast with the boys at Marlee & Me and Oly’s, and his Sunday breakfast crew that traveled the area attending benefit breakfasts. Larry is survived by his sons, Lonnie (Ruth), and Kevin (Jodi), both of Spragueville; his nine grandchildren, Quentin, Nichole, Ashley, Jeff, Addie, Marlee, Koby, Michael and Samantha; 17 great-grandchildren and 2 step great-grandchildren, son-in-law Rich (Lisa) Dierksen, and many nieces and nephews. He was preceded in death by his parents, wife Donna, daughter Sheila Dierksen in 2010, his sister and brother-in-law Phyllis and Don Nielsen, and many in-laws. The family would like to thank the Preston Ambulance Service, Jackson County Regional Health Center Emergency Room and the ambulance staff and the staff at University of Iowa Hospital for their exceptional care.

The family of Larry Leo Helmle created this Life Tributes page to make it easy to share your memories.

Send flowers to the Helmle family.