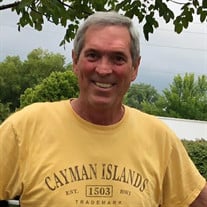 Kevin Lee Powers was a loving Husband, laid-back Dad, Mentor, Friend, loving Son, caring Brother, and awesome Grandpa. At the age of 66, Kevin passed into the arms of God after a courageous battle with cancer. A visitation will be held 4:00 – 7:00 p.m. Monday, July 6, 2020 at the Law-Jones Funeral Home, Mt. Carroll. A celebration of life service will be held 10:00 a.m. Tuesday, July 7, 2020 at the First Evangelical Lutheran Church, Mt. Carroll. Inurnment will be in Oak Hill Cemetery, Mt. Carroll. Social distancing and masks are recommended. If you choose not to attend due to the pandemic, the family will understand, and you may watch the celebration of life on the Law-Jones Facebook Live Group. Friends and family are invited to share in Kevin’s life at lawjonesfuneralhome.com. Kevin was born December 26, 1953 in Savanna, the son of Benjamin F. and Patricia (Davis) Powers. He is a 1972 graduate of the Savanna High School where he placed in the IHSA State Wrestling Tournament, and then received a scholarship to wrestle at Northwestern University, Evanston. Even though Kevin received his Bachelor of Science degree from Northwestern, it has been said he self-educated to an honorary doctorate of Philosophy. It was during college that Kevin met Diane Law from Mt. Carroll and knew she was the one. As a young couple they operated the Mt. Carroll Drive-In during the summers to help pay for college, and knew they found that they were good partners. Kevin and Diane were married August 24, 1975 at the Lutheran Church in Savanna. They have celebrated forty-four years of marriage and successfully raised two children, Adam and Alison. Kevin loved to talk, and more importantly enjoyed listening. He was a real friend to many, often sharing his wisdom to help others, and his community. He served as President and operated the Mt. Carroll Insurance Agency for 38 years, retiring in 2017 when he sold the business. Kevin was good at building relationships. He was a member of the First Lutheran Church of Mt. Carroll where he taught HS Sunday School and served on the Church Council. He was a past Alderman for the City of Mt. Carroll. Kevin enjoyed announcing sports, especially wrestling and was awarded the 2005 Newsman of the Year by the Illinois Wrestling Association. His love for wrestling was handed down to his son Adam and many other youth, as he helped coach the Eastland Mat Cats and the Savanna programs. Kevin enjoyed playing softball with his daughter Alison, golfing, water skiing, snow skiing, snorkeling, and sharing a beer while telling very long stories with expressive pauses. Kevin will be dearly missed by his wife, Diane of Mt. Carroll; his two children, Alison Powers (Nicholas Distasio) of Lemont, Illinois and Adam (Haley) Powers of Polk City, Iowa; five grandchildren, Tony and Nico Distasio, and Huxley, Myla and Ansyn Powers; his father, Benjamin Powers of Glenmoore, Pennsylvania; his brother, Robert (Betsy) Powers of Eufaula, Alabama; his sister, Debbie (Joe) Schrei of Glenmoore, Pennsylvania; his father and mother-in-law, Lyle (Lois) Law of Mt. Carroll; his brother and sister-in-law Sharon and Lee Larson of Mt. Carroll, and Carol and Steve Nortdstrom of Cedar Rapids, Iowa. Kevin is preceded in death by his mother, Patricia.

Kevin Lee Powers was a loving Husband, laid-back Dad, Mentor, Friend, loving Son, caring Brother, and awesome Grandpa. At the age of 66, Kevin passed into the arms of God after a courageous battle with cancer. A visitation will be held 4:00... View Obituary & Service Information

The family of Kevin Lee Powers created this Life Tributes page to make it easy to share your memories.

Send flowers to the Powers family.