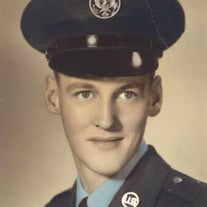 Kenneth W. Starr, age 87, of Thomson, IL, passed away Tuesday, October 19, 2021 at his home, surrounded by family. A public graveside service will be held Saturday, October 23, 2021, at 2pm at Lower York Cemetery in Thomson. Family and friends are invited to share in Ken’s memory at lawjonesfunerahome.com. Service may be viewed live by joining the group: https://www.facebook.com/groups/429460132160536/ Ken was born May 28, 1934, in Maquoketa, IA, the son of Harold and Flossie (Grover) Starr. He graduated from Thomson High School, then shortly thereafter enlisted in the United States Air Force. He served his country from 1953 to 1956, primarily as a radioman aboard search and rescue aircraft. Ken then returned home to Thomson where on one fateful day, he met Arlene Potter, a waitress at Starr café, owned by his parents. On August 29, 1960, Ken and Arlene were married. Ken and Arlene wasted little time building a life for themselves. Ken worked for 31 years for Determan Industries, retiring as Vice President, and also owned and operated a semi truck and gas station. Even more importantly, he and Arlene raised six children together and always found a way to dance their way through life; quite literally, as it turns out. Those two never missed an opportunity to hit the dance floor, even when there wasn’t actually a dance floor to hit. Put a quarter in the jukebox and within seconds, you could bet on Ken taking Arlene by the hand. If he wasn’t letting his nimble feet do the talking on those evenings out, he was probably playing his stump fiddle with his brothers by his side, striking the bones and spoons. Now, Arlene wasn’t always as big a fan of this particular talent of Ken’s, but there she was, by his side, nevertheless. Ken will be remembered as an honorable member of our armed forces, devoted husband, proud executive and business owner, and loving father and grandfather. He will be dearly missed by his children, Richard (Kay) Shear, of Thomson, IL, Cheryl Temple, of Waterloo, IA, Linda Starr (daughter-in-law), of Thomson, IL, Steve (Terry Ann) Starr, of Thomson, IL, Cathy (Marv) Green, of Mt. Carroll, IL, and Theresa (Chas) Hermann, of Naples, FL; 11 grandchildren; 16 great-grandchildren; 9 great-great-grandchildren; brother, Lowell Starr, of Thomson, IL. Ken is preceded in death by his parents, Harold and Flossie; wife, Arlene; son, Randy; infant daughter, Kimberly; and one brother, Ron.

The family of Kenneth W. Starr created this Life Tributes page to make it easy to share your memories.

Send flowers to the Starr family.