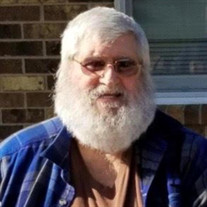 Kenneth Lee Drury, age 70, of Preston, Iowa, passed away Friday, June 26, 2020 at Mercy Hospital in Clinton, Iowa, due to heart and kidney failure. A funeral service will be held at 10:00 a.m., Friday, July 3, 2020 at Law-Jones Funeral Home, Preston, with burial to follow in Fairview Cemetery, Miles. Visitation will be held from 4:00 to 7:00 p.m., Thursday, July 2, 2020 at the funeral home. Social distancing and masks are recommended. Kenneth was born June 8, 1950 in Bellevue, Iowa, the son of Benjamin and Ida (Baker) Drury. He grew up in the Green Island area on the family farm. Kenneth attended Miles Community School. He began his career early at the age of 16 when he went to work on the Railroad. Ken worked as a laborer and machine operator on the Milwaukee Railroad repairing track. He knew hard work, and always taught his family that “If you want it, you work for it.” Kenneth met his wife Deborah Waite in August 1970. They married on October 9, 1971, and had their first son, Benjamin in 1972. Then in 1974, the couple had their second son, Jason. Kenneth left the railroad to work for Alco in Savanna, General Thermo in Maquoketa, and Products Unlimited in Sabula. His whole life, Ken has helped his mother with the Fairview Cemetery. He later took over as president of the cemetery in 1978. Kenneth enjoyed spending time outdoors, hunting deer, fishing, camping and being on the river—traits he passed on to his sons. Most of all, he loved spending time with family and friends, especially his grandchildren who where his pride and joy. Kenneth will be dearly missed by his wife of 48 years, Deborah; two sons, Benjamin (Teri) Drury and Jason (Melody Mitchell) Drury; five grandchildren, Dakota, Steven, Garrett, Logan, and Alexis (Michael) Corbin; a brother, Marvin Drury of Clinton, Iowa; and several nieces and nephews. He is preceded in death by his parents; a sister, Thelma Foster; and four brothers, Milton, Calvin, Darrell and Melvin.

The family of Kenneth Lee Drury created this Life Tributes page to make it easy to share your memories.

Send flowers to the Drury family.