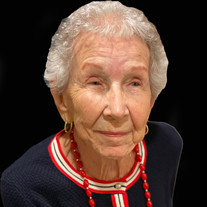 Kathleen (Kathy) Lucile Sheedy Harrod, age 99, of Franklin, TN, passed away January 20, 2022, at her residence. She was born on October 16, 1922, the daughter of the late Lucile and Leo Sheedy. Kathleen was preceded in death by her husband of 35 years, John Price Harrod, Jr.; son, John Price Harrod III; son-in-law, William Estes III; and brother, Robert Williams. Kathleen graduated from Savanna Township High School in Savanna, IL in 1939 and the St. Anthony Nursing School in Rockford, IL in 1943. On February 21, 1944, she joined the U.S. Army Nurse Corps, much to the concern of her parents. She proudly served as a 1st Lieutenant and saw action in the European Theater after D-Day. She was a nurse on the 18th Hospital Train (out of 50) where she treated wounded soldiers. Working long hours under dangerous wartime conditions, on one occasion, her hospital train was strafed by enemy aircraft. Nevertheless, she took these dangers and discomforts in stride, persisting in her commitment to the war effort, while allaying her parents’ fears with comforting letters sent home. After the end of the war, Kathleen was stationed in the Allied Occupation of Japan, where she met the dashing young Captain John Price Harrod, Jr., a doctor in the Army Medical Corps. They were married on November 13, 1948, in Tokyo, Japan. After being honorably discharged from the Army in 1949 with the rank of Captain, she and her husband returned to the U.S., where they eventually settled in Chicago, IL. In every sense of the word, she was an adventurer. From serving during World War II to raising five children during the turbulent 60s and early 70s, and to visiting over 60 countries, she had a strong, positive, fun but wise and realistic view of life. She experienced life to the fullest – she enjoyed world-wide travel; she was a connoisseur of fine food and good wine, having previously served as the Bailli (highest officer) of the Chicago chapter of the Chaine des Rotisseurs (the world’s oldest international gastronomic society, established in Paris in 1248); and most of all, she gave of herself to family and friends in a way that made her special and beloved to all who knew her. At a time when youngsters teased each other with the taunt, “Your mother wore combat boots,” her children stated with pride, “Yes, she did.” She faced every milestone in her life with a remarkably logical point of view and a unique sense of humor. An interview of Kathleen’s experience during WW2, can be found at the Atlanta History Center’s Veterans History Project. Kathleen is survived by four of her children, William Joseph Harrod (Patti) of Minnesota, Laurence Lee Harrod (Christine) of Pennsylvania, Susan Lucile Harrod of Tennessee, and Byron Anthony Harrod (Anne) of Arizona; 12 grandchildren; 18 great-grandchildren. She also leaves many other family members and friends who sadly will miss her. A funeral mass will be held at St. John the Baptist Catholic Church, in Savanna, Illinois, on June 18, 2022, at 10am. The family has requested that remembrances be made in the form of contributions to The Military Women’s Memorial.

Kathleen (Kathy) Lucile Sheedy Harrod, age 99, of Franklin, TN, passed away January 20, 2022, at her residence. She was born on October 16, 1922, the daughter of the late Lucile and Leo Sheedy. Kathleen was preceded in death by her husband... View Obituary & Service Information

The family of Kathleen L. Harrod created this Life Tributes page to make it easy to share your memories.

Send flowers to the Harrod family.