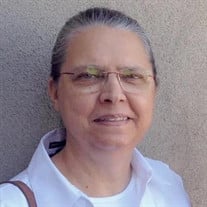 Julie Young, of Elizabeth, IL, passed away Friday, January 21st, at Midwest Medical Center in Galena, IL. Funeral service will be at 11:00 a.m. Thursday, January 27th, at the Law Jones Funeral Home in Hanover, IL. Visitation will be from 10:00 a.m. to 11:00 a.m. prior to the service at the funeral home. Friends are invited to watch the service at 1:00 p.m. on Facebook live at this link, https://www.facebook.com/groups/1698227303902469 Julie was born May 9th, 1953, daughter of Glenn and Ethel (Carlson) Rosenke. She grew up in Rockford, IL, and attended Auburn High School, graduating with the class of 1971. While Julie was in school she met the love of her life, Herbert Young. After Julie’s graduation the couple got married. Together Julie and Herbert celebrated 50 years of marriage, and raised three children; Beri, Stuart, and Andrew (deceased). After marriage, Julie and Herbert spent the better part of ten years in Rockford before moving to Arizona, where they would stay for the next 43 years. It was in Phoenix where Julie raised her three children. As a mother, Julie challenged her kids to learn about the world around them. She introduced her children to literary giants such as Charles Dickens, and encouraged her kids to read. It was of utmost importance that Julie’s family went to church and participated in their faith. As a mother she made sure her kids were raised with a strong belief in Christ and lived their lives accordingly. She was an active member of her church community. For many years she taught children’s Sunday School, and also trained others in various Sunday school seminars on how to become better teachers. She spent many hours decorating her classroom, and preparing thorough lesson plans for her students. As a devout Christian, she was always looking for ways to talk to people about God. Julie was known for her cooking and wasn’t afraid to try new recipes. Some were more successful than others. Like her incredibly spicy burritos, which where enjoyed for one dinner, but were never made again. She loved to sew and make quilts which were known for their tremendous craftsmanship. Often times she was known to give her quilts to friends and family as gifts to be treasured for many years to come. Julie was incredibly giving and charitable. Many times she would sacrificially give to church planters, foreign missionaries and people who were going through difficult times. She never saw anyone as a stranger, and made friends with everyone she met. At the center of her life was faith and family. Her kind heart and strong devotion to our Lord lives on in those she held close. Julie will be dearly missed by her loving husband, Herbert Young of Elizabeth; two children, Beri (Andy) Dolan of Rockford, and Stuart (Darla) Young of Colorado; one daughter- in-law, Pauline Young of Arizona; four grandchildren, Hannah Young of Colorado Springs, Ezekiel Young of Arizona, Holly Young, and Heidi Young of Colorado Springs; and three brothers, Scott (Dot) Rosenke of North Carolina, Michael (Sharon) Rosenske of California, and Randy (Laura) Rosenke of Alabama. Julie is preceded in death by her son, Andrew Young; and her parents, Glenn and Ethel Rosenke.

Julie Young, of Elizabeth, IL, passed away Friday, January 21st, at Midwest Medical Center in Galena, IL. Funeral service will be at 11:00 a.m. Thursday, January 27th, at the Law Jones Funeral Home in Hanover, IL. Visitation will be from 10:00... View Obituary & Service Information

The family of Julie Young created this Life Tributes page to make it easy to share your memories.

Send flowers to the Young family.