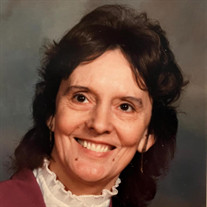 Judith Ann “Judy” Dunn was a fiercely-loving Mother, Grandmother and Great-Grandmother. Over the years, she was known as being strong-willed, even being described as a warrior and real firecracker, as she cared for her growing family and her students, teaching Special Education for 27 years. At the age of 79, Judy passed away December 11, 2021 at home in Thomson, Illinois in the loving care of her family and Rock River Hospice. Those unable to attend services may join the livestream at https://www.facebook.com/groups/280630604097760 Judith was born April 27, 1942, in Savanna, the daughter of George and Beulah (Corbett) Pratt. Her family moved to Shelbyville, Missouri where she graduated from high school with the Class of 1959. They later moved to Alamogordo, New Mexico where she worked as a waitress in her mom’s restaurant. It was there in New Mexico where her two children, John and April were born. Judy’s father passed away the family moved back to Savanna in 1968, where she took a job at Eaton Corp. Judy was fortunate to have her mom, Beulah living with her for a short time as she raised the kids, and always lived near her mom throughout the years. When April started kindergarten, Judy began her college education at Clinton Community in 1971, then on to the University of Dubuque receiving her B.A. in Special Education in 1975. She later received her Master’s Degree from Western Illinois University in 1995. Judy taught in Hanover in 1980-1981, then the River Bend School District from 1984 retiring in 2010. In 1970, Judy married Edward Smith. He passed away in 1973. She later married Danny Dunn April 15, 1976. They celebrated 23 years of marriage before he passed away in 2009. Danny and Judy owned and operated the Hanover Café from 1979 – 2001, this time counting on her mom, Beulah, to help her by cooking pies, and helping to run and cook in the kitchen. Judy enjoyed reading, walking, her book club, volunteering at the Fulton Thrift Store, playing the lottery and spending time with her friends and doing lunch. She especially enjoyed family events, spending time with grandchildren and great-grandchildren. Judy will be dearly missed by her son, John (Sheila) Looney of Chadwick; her daughter, April (Randy) Joyner of Huntsville, Alabama; five grandchildren, Ryan (Evy) Looney, Chad Looney, Angel Looney, BriAnn Joyner and Nate Joyner; four great-grandchildren, Robert and Rio Looney, and Lexi and Lacey Warren; two brothers, Herbert (Sandy) Pratt of Thomson and James (Wanda) Pratt of Las Cruces, New Mexico; two sisters, Diana Tharp of Pittsburgh, Oklahoma and Dorothy Oliver of Huntsville, Alabama. Judy is preceded in death by two husbands, Danny Dunn and Edward Smith; a brother, John Pratt; and both parents. A funeral service will be held 4:00 p.m. Saturday, December 18, 2021 at the Law Jones Funeral Home in Savanna with a visitation prior to the service from 2:00 – 4:00 p.m. at the funeral home. Pastor David Yim of the First United Methodist Church of Savanna will officiate.

Judith Ann &#8220;Judy&#8221; Dunn was a fiercely-loving Mother, Grandmother and Great-Grandmother. Over the years, she was known as being strong-willed, even being described as a warrior and real firecracker, as she cared for her growing family... View Obituary & Service Information

The family of Judith Ann "Judy" Dunn created this Life Tributes page to make it easy to share your memories.

Send flowers to the Dunn family.