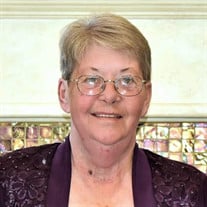 Joyce Carol (Richardson) McHenry, age 70, of Mt. Carroll passed away suddenly Monday, March 22, 2021 at the UW Hospital, Madison, Wisconsin. She was a loving Mother, Grandmother, Great-Grandmother and Friend. A funeral service will be held 2:00 p.m. Saturday, March 27, 2021 at the Law Jones Funeral Home, Mt. Carroll with a visitation prior to the service from 12 Noon – 2:00 p.m. You may also watch the service from home on FB Live at https://www.facebook.com/groups/2843568115900334. Joyce was born March 23, 1950 in Enid, Oklahoma, the daughter of Kelbur Don and Garnette Marie (Meek) Richardson. She was a natural tomboy, and stubborn to boot, attending Lawton High School in Oklahoma. At the age of 17, when her father was going to work in Los Angeles, she took the opportunity to move to the big city where she met and later married Michael Blais, spending 20 years together, and raising three children. Near LA, in La Puente, California, she worked as a waitress at a Charlie Brown Restaurant and then began her career at Motion Industries. Joyce later married Kenneth McHenry and they moved near Dayton, Ohio where she continued her work with Motion Industries becoming a Branch Manager. After retirement, Joyce moved to Mt. Carroll to be near family. It is in Mt. Carroll that Joyce cared for her father until his passing in 2015. She was a one-of-a-kind Grandma, who could also be your best friend. Joyce was an avid NASCAR fan, great cook, and loved days that she could just go barefoot. General Hospital was her favorite since she was a kid. Joyce loved her fur babies, Cali and Daisy, and bird watching. Teaching her grandkids about life was her biggest joy. In 2002 she had a heart attack, and in 2006 she suffered a stroke. Even though these presented challenges in her life, Joyce kept her chin up and lived with strength and grace. Joyce will be dearly missed by her son, Michael (Dolores) Blais of Mt. Carroll; her daughter, Denise (Thom) Casey of Thomson; her step-son, Scott (Tracy) Stimpson of Boise, Idaho; a daughter-in-law, Aurora Blais and her best buddy of 50 years Judy Kinninger; fourteen grandchildren, Jeffrey (Courtney) Casey, Jacob (fiancé Shirley) Casey, Sara (Ryan) Charlesworth, Krystal Curry, Alex (Terrah) Castro, Mehgan Montanez, Roger (fiancé Vanessa) Blais, Shayne Johnson, Mercedes (fiancé Chris) Johnson, Mikie Blais, Kendalynn Richardson, William (Victoria) Tidrick, Heather (Brett) Arey and Chris Wolfram; 16 great-grandchildren and two on-the-way; two brothers, Tom (Johnna) Richardson and Randall (Trudy) Richardson; and a sister, Donna Gottschalkson. Joyce also raised several foster children, including Floyd White who was like a son. Joyce is preceded in death by her son, Kenneth Don Richardson in 1991; her brother-in-law, John Gottschalkson; and both parents.

The family of Joyce Carol (Richardson) McHenry created this Life Tributes page to make it easy to share your memories.