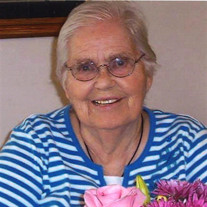 Joyce Carter, age 89, formally of Miles, Iowa, passed away Monday, February 3rd, 2020, at Parc Hall Nursing Home in Emmetsburg, Iowa. A memorial service will be held at 10:30 a.m., Saturday, February 8th, at the Presbyterian Church in Miles. Visitation will be held 9:30 a.m. to 10:30 a.m. at the church prior to the service. Joyce was born August 18th, 1930, in Douglas North Dakota, the daughter of Joy and Lillian (Larson) Hanson. After graduating from Douglas Middle School, Joyce moved to Minneapolis, Minnesota with her family. It was there that she met the love of her life, Joseph Carter. On February 6th, 1949, Joyce married Joseph, and together moved to their farm just outside of Miles. The couple celebrated 61 years of marriage until Joseph’s passing in 2010. Together Joyce and Joseph raised eight children. Joyce was a traditional farmer’s wife, waking up early to tend to the livestock, making the kids clothes, and tending to all chores around the farm. She took great pride in her garden. Much like her house, her garden was pristine, every plant in its place with no weeds in sight. Joyce was an active member of her community and church. She participated in all American Legion Auxiliary events, in honor of her late husband’s service during World War II. At her church, Joyce was a member of many committees and groups. Joyce will be dearly missed by four daughters, Dr. Paulette of Grand Island, Nebraska, Nancy Painter of Durant, Iowa, Lorraine Rogers of Muscatine, Iowa, and Connie Carter of Ringsted, Iowa; two sons, Vernon Carter of Fort Lauderdale, Florida, and James Carter of Davenport, Iowa; eight grandchildren, 10 step-grandchildren, 6 great-grandchildren, 11 step-great-grandchildren, three sisters, Deloris Feldman, Koreen Gerden-Palson, and Joan Heckenaible. Joyce is preceded in death by her husband Joseph, her parents Joy and Lillian, her daughter Diane Carter, her son Dr. Ronald Carter, and her brother Richard Hanson.

The family of Joyce L. Carter created this Life Tributes page to make it easy to share your memories.

Send flowers to the Carter family.