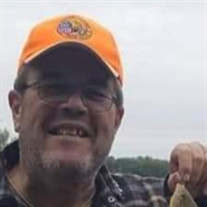 Joseph A. Randall, age 70, of Savanna, IL, passed away Tuesday, February 23, 2021, in his home after a brief and courageous battle with cancer. A funeral service will be held Saturday, February 27, 2021 at Law Jones Funeral Home in Savanna, at 3pm. Visitation will take place from 1-3pm before the service. Family and friends are invited to share in Joe’s life at lawjonesfuneralhome.com. Joe was born October 22, 1950, in Savanna, IL, the son of George and Grace (Chafer) Randall. On June 9, 1972, Joe married Roberta Housenga, in Mt. Carroll; the couple went on to celebrate 48 years of marriage and raise four children. Shortly after his school days, Joe served in the United States Army, first in Germany (with many stories to tell), then 9 months in Vietnam. Joe served from October 1967 to October 1970. He didn’t often speak of his days in Vietnam, but he was proud to have served his country. Joe spent the rest of his working life with the railroad, totaling 37 years with Chicago Northwestern and later Union Pacific, before retiring in 2010. Joe was a member of the VFW and American Legion, and served as Governor for the Moose Lodge. In his free time, he loved to camp and fish, spend many hours outdoors with his children and grandchildren, as well as play euchre and watch NFL games, for which he oversaw/managed the family betting pool. In his quiet time, he enjoyed reading, watching crime shows, or woodworking in the garage. Joe was a family man, filling that role in different forms throughout his life. In his working years, he commuted to Chicago regularly to work and support his family. Despite the grueling commute, he still made it to all events of importance with overwhelming love and support, each time. In his retirement, with the abundance of time, he reveled in his role all the more, as the patriarch. Joe will be dearly missed by his wife, Roberta; sons Scott Cravatta, of Mt. Carroll, IL, and Troy (Jamie) Randall, of Lanark, IL; daughters, Candy (Anthony) Marine, of Berwyn, IL, and Angela (Michael Leitzen) Randall, of Clinton, IA; eight grandchildren, Falicia, Brady, Jordan, Jennah, Alexis, Caydence, Taylor, and Brandon; one great-granddaughter on the way, Aspyn; brothers, Robert Randall, of Savanna, IL, and William Randall, of Savanna, IL; sisters, Mary Gilmore, of Savanna, IL, and Sandra (Larry) Chrest, of Sabula, IA; nephew, Jeremy; and niece, Holly. Joe is preceded in death by his parents, George and Grace; brothers, Gerald Randall and Edward Randall (infant); sister, Ellen Randall (infant); and nephew, Logan Randall (infant).

Joseph A. Randall, age 70, of Savanna, IL, passed away Tuesday, February 23, 2021, in his home after a brief and courageous battle with cancer. A funeral service will be held Saturday, February 27, 2021 at Law Jones Funeral Home in Savanna,... View Obituary & Service Information

The family of Joseph A. Randall created this Life Tributes page to make it easy to share your memories.

Send flowers to the Randall family.