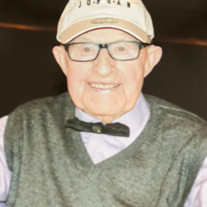 Joseph F. Flies Sr. (Joe), age 102, of Fulton, IL, passed away peacefully on Wednesday, May 12, 2021. A private family service will be held at a later date due to the current pandemic. On February 14, 1919, Joe was born in Kellogg, Minnesota to Joseph and Martha Flies, where he ultimately grew up and attended school. On February 14, 1940, he married Betty Faye Murphy and was married for 70 years until her passing in 2010. He is a member of the First United Methodist Church. Joe is a WW II veteran and was stationed in California headed for Japan when the war ended. He was also a member of the American Legion and VFW. After moving to Hanover, IL, Joe and his wife Betty owned and operated several different restaurants in both Hanover and Savanna for nearly 50 years. In his later years, Joe very much enjoyed his large gardens and was an avid bike rider logging several thousand miles a year. He was also an exceptional cook and loved fishing and traveling. He was a loyal Chicago Bulls fan and enjoyed watching Michael Jordan win his six rings. Joe also worked at the Savanna Army Depot, International Paper in Clinton, IA and AA Fertilizer in Plainview, MN, along with numerous other jobs during the 1930’s and early 40’s. He never met a stranger and was always outgoing and friendly to everyone. Joe is preceded in death by his wife Betty, his youngest son Jimmy, his parents Joseph and Martha, four brothers Donald, Mike, Johnny and Robert, and a sister Margret. He is survived by his daughter Virginia (Bill) Haas of Fulton, IL, two sons Richard (Kathi) Flies of Williamston, VT and Joseph, Jr. (Cris) of Naperville, IL, as well as 11 grandchildren and 16 great-grandchildren and 3 great-great-grandchildren. His family was the center of his life. Joe will be sadly missed by his family and friends.

Joseph F. Flies Sr. (Joe), age 102, of Fulton, IL, passed away peacefully on Wednesday, May 12, 2021. A private family service will be held at a later date due to the current pandemic. On February 14, 1919, Joe was born in Kellogg, Minnesota... View Obituary & Service Information

The family of Joseph F. Flies Sr. created this Life Tributes page to make it easy to share your memories.

Send flowers to the Flies family.