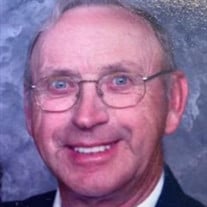 John W. “Jack” Janssen, age 90 of Chadwick, Illinois passed away Saturday, May 14, 2022 at CGH Medical Center in Sterling, Illinois. A funeral service will be held 10:30 am Saturday, May 21, 2022 at Hope United Methodist Church in Chadwick. Visitation will be held 4 – 7 pm Friday at the Church, and also one hour prior to the service, with Masonic Rites at 9:45am Saturday. John “Jack” was born December 24, 1931 at home on the farm, the son of William and Liota (Heide) Janssen. He attended Hartman Country School until the 4th grade, then attended Fairhaven Country School, and graduated from Chadwick High School with the Class of 1949. FFA was a big part of Jack’s high school years as he developed as a young farmer. It was during these years when Jack began to notice the future love of his life, Joyce Rahn. Jack and Joyce were married April 25, 1954 at Hope United Methodist Church in Chadwick. They raised four children, Jerry, Jeff, JoDell and Jonathan, along with celebrating 68 years of marriage. Also in 1954 – 1956, Jack served in the US Army along with his brother Richard. Jack and his brother took the Honor Flight to Washington DC in 2015. “Keep it simple” was one of Jack’s favorite sayings, as he farmed and cared for the land. The most important things in Jack’s life included family, community, and caring for God’s earth. The “good ole days” included planting, harvesting, milking cows, feeding beef cattle, raising chickens, hogs, and sheep. He always used Farmall and International tractors. Jack balanced his work, with his love of hunting, fishing and enjoying the outdoors. For many years he joined a friend on a prairie dog hunt out west in Colorado. Jack was a member of Fairhaven United Methodist Church, 50 year member of the Masonic Lodge along with the Tebala Shrine, a charter and 50 year member of the Chadwick Lions Club, a Jo-Carroll board member from 1979-2011, and a life member of Pheasants Forever and the Eagle Foundation. Jack believed in caring for his neighbors and community. Jack will be dearly missed by his wife Joyce of Chadwick; four children, Jerry (Jennie) Janssen of Chadwick, Jeff (Patty) Janssen of Phoenix, Arizona, JoDell (Butch) Suiter of Mt. Carroll and Jonathan (Kate) Janssen of Chadwick; 6 grandchildren, Lindsay (Chris Sack), Lacey (Chris) Duran, Ben (Jacey), Emily, Alexis and Addison; two great grandchildren, Andrew and Ada Duran; two step grandchildren, Beth Johnson and Chris James; a brother, Richard (Nancy) Janssen of Milledgeville; and a sister, Mary Morgan of Lanark. Jack is preceded in death by both parents and a brother-in-law, George Morgan.

The family of John W. "Jack" Janssen created this Life Tributes page to make it easy to share your memories.

Send flowers to the Janssen family.