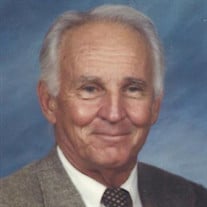 John “Jack” Whitney White would light up a room with his storytelling and laughter. At the age of 84, Jack passed away peacefully in his home on Sunday, May, 3, 2020. Jack was born January 27, 1936, in Hanover, IL and was the son of Alva White (1895-1947) and Dorothy (Girot) White-Whalen (1901-1987). Jack graduated from Hanover High School, then proudly served in the U.S. Military, stationed in France. After being discharged from the military, he worked as an Illinois State police officer for a number of years. He then worked as a heavy equipment operator before ending his working career as a farmer on his family’s farm. He enjoyed cruising around the county in his Jeep, having coffee with friends discussing daily happenings, and golfing at Storybrook Country Club. He was a long-time member of St. Paul’s Lutheran Church in Hanover, the Stockton Masonic Lodge, and a proud member of the Hanover community. Jack is survived by his wife of 44 years, Shirley (Conover) White; two daughters, Barbara (David) Klever of Elizabeth, and Amy (Lenn) Fogel of Lena; five step-children including Mark Kinnaman of Sterling, IL, Linda “Denise” Garza of Colorado Springs, CO, Daniel (Lori) Kinnaman of Hanover, Michael Kinnaman of Sterling, IL, Joseph (Kathy) Kinnaman of Peosta, IA; and many grandchildren. A private family funeral service will be held. You may watch the service from your home on Facebook Live at 10:30 am Saturday, May 9, 2020, or any time after, by going to the Law-Jones Facebook page and joining Jack’s group ahead of time. A memorial fund has been established.

The family of John "Jack" Whitney White created this Life Tributes page to make it easy to share your memories.

John “Jack” Whitney White would light up a room with his storytelling...

Send flowers to the White family.