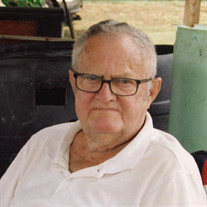 John F. Carr, age 80, of Wacker, IL, passed away Friday, April 10th 2020, surrounded by his loved ones at his home. Cremation rites have been accorded. A private family service will be held at Hickory Grove Cemetery in Wacker. A celebration of life will be held at a later date. John was born April 30th, 1939, in Spruce Pines, North Carolina, son of Inez Carr. He spent his childhood in North Carolina, and enlisted in the United States Army in 1959. John was stationed in Ludwigswinkel, Germany, where he met the love of his life Gertrud Jagle. Despite the language barrier the couple hit it off. In 1961, before John was sent back to the United States, the two of them married. Together John and Gertrude raised six children and celebrated 58 years of marriage. John was a hard worker. He worked at the army depot in Savanna for many years, and then for Milwaukee Railroad after that. He was always doing something, whether it was taking care of the families many animals, or making improvements to the house he built for his wife and children. John taught his children that hard work is always rewarded, a virtue his family will carry with them for years to come. John will be dearly missed by his wife, Gertrud Carr, of Wacker; six children, Belinda Carr of Flagstaff, AZ, John Carr Jr of Savanna, Monika (Todd) Manon of Albany, IL, Steven (Tara) Carr of Milan, IL, and Thomas (Denise) Carr of Clinton, IL; 17 grandchildren; 32 great-grandchildren; and one great-great-grandchild; four brothers, George (Jan) Blevins of Whitte Marsh, MD, Richard Blevins of Lenor, NC, David (Connie) Blevins of Milledgeville, IL, and Sam (Peggy) Blevins of West Jefferson, NC; two sisters, Cathy (John) Adams of Charlotte, NC, and Libby (Sonny) Eller of Lenor, NC. John is preceded in death by his daughter Lolieda, his mother Inez, and his brother Rob.

John F. Carr, age 80, of Wacker, IL, passed away Friday, April 10th 2020, surrounded by his loved ones at his home. Cremation rites have been accorded. A private family service will be held at Hickory Grove Cemetery in Wacker. A celebration... View Obituary & Service Information

The family of John F. Carr created this Life Tributes page to make it easy to share your memories.

Send flowers to the Carr family.