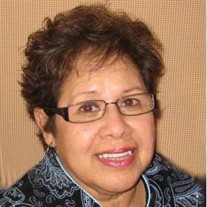 JoAnn “Lena” Hernandez, 84, of Savanna, passed away Friday, March 13, 2020, at Big Meadows Nursing Home in Savanna. A funeral Mass will be held at 11 a.m. Saturday, March 21, at St. John the Baptist Catholic Church in Savanna. Visitation will be 9-11 a.m. Saturday, March 21, at the Law-Jones Funeral Home in Savanna. She was born on April 6, 1935, in Savanna, the daughter of Ascension and LaVonne (Hernandez) Rivera. She grew up in Savanna, attending Savanna schools. It was in Savanna where she met the love of her life, Francisco “Frank” Hernandez, whom she married on Dec. 8, 1952. The couple celebrated just shy of 64 years of marriage upon Frank’s passing in 2016.They raised their children in Savanna and later moved to Davenport, Iowa for many years after the railroad relocated Frank. Lena had a lifelong faith and was an active member of the Catholic Church communities in Savanna and Davenport, Iowa. She was a homemaker her entire adult life, raising their children while also working at the Eaton Corporation until her retirement in 1987. They lived in Davenport, Iowa until after Frank’s retirement where they moved back to Savanna. She was always known as the “Cool Mom” and as a “Firecracker." Lena had a witty sense of humor and was a great storyteller, often times spicing it up with colorful language. She was short in stature but feisty and always the life of the party. Her Christmas parties were the highlight of the year, where family and friends gathered and always enjoyed their Christmas tamales. She knew how to cook and was always ready to dance to good music. She taught her children how to love life and their family, traits they have carried on with them into the future. Lena will be dearly missed by her two daughters, Cindy Estrada of Sterling, and Pam (Ranulfo) Villalobos of Savanna; her two sons, John (Yvette) Hernandez of Mesa, Ariz., and Thomas (Michelle) Hernandez of Horse Shoe, N.C.; and lifelong love of the late Danny Joe, Kris Plattenberger of Savanna; 17 grandchildren and 13 great-grandchildren and one on the way; her sister, Pat Haggerty of Hanover; two brothers, Tony (Judy) Rivera of Camanche, Iowa and Frank Rivera, of Collinsville; her brother-in-law Ruben Gutierrez of Del Rio, Texas and sisters-in-law Pompella Saldaña of Burley, Idaho and Laura Rivera of Hanover and many nieces and nephews. She is preceded in death by her husband Frank, infant son Thomas and son Danny Joe; parents Ascension and LaVonne; brothers Mike Rivera and John Rivera; sisters Mary (Wes) Bradley and Kay (Herb) Greve and brother-in-law Howard Haggerty.

The family of JoAnn "Lena" Hernandez created this Life Tributes page to make it easy to share your memories.

Send flowers to the Hernandez family.