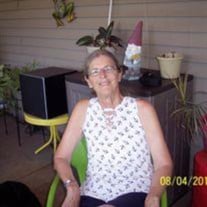 Joan Marie Cawley passed away at home in Bullhead City AZ after a short battle with cancer. Joan was born June 11th, 1952 to George and Mary Haynes Phillips at Savanna City Hospital. Memorial services will be held at Law-Jones Funeral Home, Savanna, with visitation from 12:00 noon – 2:00 p.m. Saturday, July 31, 2021. Graveside services will follow at Evergreen Cemetery, Sabula. A celebration of life will be held at 3:00 p.m. in the home of Gary and Jennifer Zink. Joanie graduated from Sabula High School in 1970. She lettered in Band and Basketball and was on the student council. She was Homecoming Queen her senior year. After graduating from Clinton Business College, Joanie worked for a local insurance company as an administrative clerk. She was transferred to the Chicago area and then worked in Civil Service at the Great Lakes Naval Base (where her father George was once stationed). This is where she met a sailor, Bill Cawley, who would become her husband. In February 1974 Joanie and Bill were married in Norfolk VA, where he had been transferred. After his release from the Navy, Joanie and Bill moved to Bethlehem, PA, Bill’s hometown. Joanie worked for several attorneys, eventually settling in at Hamilton Abstract Company, where she stayed for 25 years, until her first retirement. After their retirements, Joanie and Bill made the move back to the Midwest, making their home in Silvis, IL. Here in the Quad Cities, Joanie returned to work in the title and abstract business. Ultimately, Joanie and Bill again retired from their respective jobs and relocated to the warmer climate of Bullhead City Arizona. Joanie loved jigsaw puzzles, crosswords and trivia games. There weren’t many who could beat her at “Wheel of Fortune” or “Jeopardy”. She was very involved with league bowling for many years in Pennsylvania. She loved travelling, especially with their bowling leagues. Joanie and Bill went on several cruises and made some sightseeing trips across the U.S. and into Canada. Joanie was a NASCAR fan and enjoyed car shows, going often to them at the Jersey Shore. No matter which part of the country was their home, she remained a loyal Chicago Bears fan, although she would also root for the Green Bay Packers. Joanie loved baking and was famous for sharing her goodies. During the holidays, all her neighbors and relatives would be delighted to receive her cookies, cakes and sweet breads. Joan was preceded in death by both parents, step-father Harold Jorgenson, brother George Phillips and Parents-in-Law William and Helen Cawley. She is survived by her husband Bill, one sister Jennifer (Gary) Zink of Savanna IL, one brother, James (Dawn) Phillips of Sabula IA, sister-in-law Betty Ann Cawley of St. Peters, MO one niece Jennifer (Randy) Royer and great nephew Jace Royer of St. Charles, MO.

The family of Joan M. Cawley created this Life Tributes page to make it easy to share your memories.

Joan Marie Cawley passed away at home in Bullhead City AZ after...

Send flowers to the Cawley family.