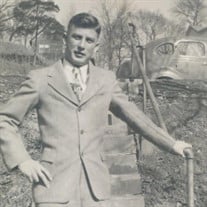 Jim “Papa” Themas, of Thomson, IL, passed away at home with his loving family by his side, on Sunday April 17, 2022. A funeral service will be held at Law Jones Funeral Home in Thomson, IL at 12 noon on Saturday, April 30, 2022. Visitation will take place from 10am to 12 noon, prior to the service. Family and friends are invited to share in Jim’s life at lawjonesfuneralhome.com. Jim was born June 1, 1929 in Savanna, IL, the son of Sam and Edith (Eversoll) Themas. He graduated from Savanna High School with the class of 1948. Jim then enlisted in the United States Air Force, proudly serving, his country during the Korean War. On January 28, 1958, Jim married Pauline Stabryla. They would go on to have three children. Jim first worked for the Milwaukee railroad before going on to work and retire from both Clinton Corn (now ADM) and the Savanna Army Depot, where he was a carpenter. He was a tinkerer and handyman, and kept this going well into his retirement years. He enjoyed camping and fishing, as well as poker and other social gatherings, where he was known as Jimmy the Greek. But his family, especially his grandchildren, and his great grandchildren, were always the source of his greatest happiness. Jim will be dearly missed by his son, Robert (Jeannine Anderson) Themas, of Sabula, IA; daughter in law, Cheryl Themas, of Clinton, IA; daughter, Deborah (Joe Dean) Themas, of Roseville, IL; six grandchildren, Mark Themas, Regina (Duane) Smith, Angela (Heath) Bergman, Aaron Themas, Amanda (Matthew) Smith, and Adriane (Nick Cunningham) Themas; eleven great grandchildren, Tyler and Lily Themas, Aidan, Rowin, and Kye Smith, Owen and Mason Themas, Gabriel, Caleb, and Calliope Themas-Smith, and Nash Cunningham. Jim is preceded in death by his parents, Sam and Edith; wife, Pauline; son, Richard Themas; granddaughters Amber and Amara (infants); brother, Spiros Themas; sister Mary Walden; and half brother, Gary Purcell.

The family of Jim Themas created this Life Tributes page to make it easy to share your memories.

Jim “Papa” Themas, of Thomson, IL, passed away at home with his...

Send flowers to the Themas family.