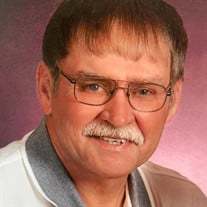 Jerry L. Spencer, age 70, of Milledgeville, IL, passed away unexpectedly on Wednesday, January 19, 2022, at his home. A funeral service will be held at Dutchtown Church of the Brethren, in Milledgeville, IL at 11 am on Monday, January 24, 2022. Visitation will be held Sunday, January 23, 2022, at Law Jones Funeral Home, in Mt. Carroll, IL, from 3pm to 6pm, as well as one hour prior to Monday’s service at the church. Family and friends are invited to share in Jerry’s life at lawjonesfuneralhome.com. Jerry was born March 3, 1951, in Sterling, IL the son of Harold “Teen” and Alice (Weaver) Spencer. He attended school first in Rock Falls, but then predominantly in Mt. Carroll, where he graduated from Mt. Carroll High School with the class of 1969. Jerry married and had three daughters, Tina, Tammy and Tracy. He went on to become Dad to Erica and Philip. Jerry made a career out of public service. He served on the Mt. Carroll Police Dept. for a total of 24 years, first as an officer from 1976 to 1982, then as Chief of Police from 1982 to 2000. He also served as a volunteer firefighter for the better part of a decade. Upon his retirement from the police force, Jerry purchased JJ’s Comeback Inn bar and restaurant in Milledgeville, and ran the establishment until 2017. Jerry was never one to remain idle; and on top of his police career and restaurant/bar ownership, he always farmed, raising crops and cattle. He also operated Jer’s Line Cleaning Service for more than 25 years. Jerry married Jane Diehl on November 24, 2001 and became step-dad to Stacey and Brody. He was a family man first and foremost, who never missed an opportunity to spend time with his beloved wife, seven children, and 16 grandchildren. He loved spending a day boating on the Mississippi or watching his grandchildren’s sporting events. In his free time he enjoyed hunting and fishing and playing cards. He and a group of friends, the “breakfast club” as Jerry’s family so fondly referred to them, would play cards at his bar nearly every morning. In fact, some might argue that was the main purpose for Jerry owning that bar! Jerry never steered far from his farming roots. He was a staple at local farmer’s markets and had a passion for preparing and sharing quality beef and garden fresh produce with family and friends, old and new. Jerry lived life to the fullest and especially loved going on adventures and having fun with his true love and best friend, Jane. Jerry will be dearly missed by his wife, Jane; mother, Alice; five daughters, Tina (Greg) Pallardy, of Naperville, IL, Tammy Spencer, of Naperville, IL, Tracy (Kelcy) Hutchison, of Milledgeville, IL, Erica (John) Stasiek, of Pendleton, SC, Stacy (Mike) Munz, of Milledgeville, IL; two sons, Philip (Jennifer) Beckley, of Piedmont, SC and Brody Wolf, of Sterling, IL; 16 grandchildren, Jack and Drew Pallardy, Grayson and Maddox Hale, Kailyn and Rowen Hutchison, Eleanor, Jack, Benjamin and Samuel Stasiek, Jameson and Vivian Beckley, Jack and Caley Munz and Taeya and Garret Wolf; brother, Larry (Bev) Spencer, of Baldwyn, MS; and sister, Sherry (Fred) Randecker, of Mt. Carroll, IL. Jerry is preceded in death by his father, Harold Spencer and great niece, Ericka Kerley. In lieu of flowers, donations may made to the Carroll County law enforcement scholarship fund.

Jerry L. Spencer, age 70, of Milledgeville, IL, passed away unexpectedly on Wednesday, January 19, 2022, at his home. A funeral service will be held at Dutchtown Church of the Brethren, in Milledgeville, IL at 11 am on Monday, January 24, 2022.... View Obituary & Service Information

The family of Jerry L. Spencer created this Life Tributes page to make it easy to share your memories.

Send flowers to the Spencer family.