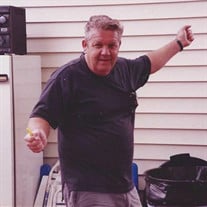 Jerry Kenneth Lewter, age 75, of Savanna passed away Wednesday, November 17, 2021 at FHN Memorial Hospital, Freeport. A family celebration will be held in the future to honor his life. Jerry and his wife Mary have lived in Savanna since 1997. He had the gift of gab, was a friend to many and loved to sit on his porch and talk to anyone that would stop by. It was easy to listen to his stories as he spoke with a southern drawl. Mary said when she first met him, it was his smile and Deviled Eggs that captured her heart. Jerry was born July 10, 1946 in Huntsville, Alabama, the son of Melvin and Mamie (Nolan) Lewter. He lived through a challenging childhood, while attending a boy’s school in Huntsville. It was at this school that he found a mentor that helped him excel at his gift of math and being one of three boys to attend the statewide Boy scout Jamboree. This gave Jerry confidence in life as he grew into a young man. He became a good carpenter and roofer, and after moving to Chicago, joined the Roofer’s Union. It is in Chicago that Jerry met the love of his life, Mary Downam Bowman. They were married March 11, 1971 in Chicago. He loved spending time with family, especially Sunday breakfast and family gatherings in the front yard, Jerry was known for making wood crafts for his family and friends. He will be dearly missed by friends and family: Mary his wife; two daughters, DeAnna (Charlie) Shepherd of Savanna and Tammy Lewter of Alabama; two sons, Michael Bowman of Oklahoma, and Darrell Lewter of Alabama; twelve grandchildren; eight great grandchildren; a sister, Brenda (Hallie) Bamford of California. He is preceded in death by his parents; a son, Randall Scott Bowman; two sisters, Darlene Lewter and Joyce Trussell; and five brothers, Charlie, Donald, Robert, Wayne and Johnnie, and 2 great grandchildren. Jerry was like a father to Charlie Shepherd and the whole Shepherd family will miss him as blood.

Jerry Kenneth Lewter, age 75, of Savanna passed away Wednesday, November 17, 2021 at FHN Memorial Hospital, Freeport. A family celebration will be held in the future to honor his life. Jerry and his wife Mary have lived in Savanna since 1997.... View Obituary & Service Information

The family of Jerry Kenneth Lewter created this Life Tributes page to make it easy to share your memories.

Send flowers to the Lewter family.