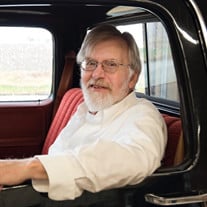 Jeffrey A. Heldt, age 68, of Lanark, IL, passed away Saturday, June 26, 2021, at his home with his family by his side. A memorial gathering will be held Friday, July 2, 2021 at Law Jones Funeral Home in Lanark from 3pm to 6pm. Family and friends are also invited to share in Jeff’s life at lawjonesfuneralhome.com. Jeff was born August 18, 1952, in Dixon, IL, the son of Edward and Martha Lodean (Thompson) Heldt. He attended Lanark schools, graduating from Lanark High School with the class of 1970. Following high school, Jeff enlisted in the United States Air Force, dutifully serving his country during a time of war. He married Dianne Midthun and had two boys. After his time in the Air Force, Jeff graduated from DeVry University and went to work for Micro Switch, now Honeywell, in Freeport, IL. In 2004, Jeff married Cheryl Dillon, enjoying 17 years of marriage before his untimely death. Jeff was a man of many talents. He could fix anything. His biggest complaint, though, was that he couldn’t get around to his projects because something else always needed fixing. His pride and joy was his black truck that he built from the frame up with the help of his eldest son, Brian; and he also put together a seriously mean wood splitter with son, Mat. Jeff enjoyed working in the shop that he built in the barn alongside his sons. There was always a list of things to work on, but Jeff would often change his mind along the way and never quite get the list complete. Jeff was really good with electronics, and he enjoyed the heck out of the complex projects that none of the rest of us could figure out! And the great part is that he passed those skills on to his sons and taught them how to work with their hands. Jeff was a homebody. He enjoyed spending time with his family and watching TV, YouTube, and the squirrels running around outside. He had a wonderful sense of humor and loved joking around with Brian, Mat, and Abby. Abby would put goofy hats on him and then grab a photo for future opportunities for blackmail! Jeff was loved by all, and we loved him despite his tendency to always run late. Jeff and Cheryl enjoyed a wonderful life together, and he will be missed terribly. Jeff is now in a place where his projects will always be done, where time is of no concern, and where he will watch over his family with peace and love. Jeff is survived by his wife, Cheryl; his former wife, Dianne Eisenhuth (Billy); his sons, Brian Heldt (Tonya); Mat Heldt; step-kids Abby Zink (Randy), Michael Dillon (Kerris), his brother, John Heldt (Joyce) and his grandkids, Austin, Justin, Tyler, Ari, Deacon, Sydney, Gabe, and Kalan. Jeff was preceded in death by his parents, Edward and Lodean.

Jeffrey A. Heldt, age 68, of Lanark, IL, passed away Saturday, June 26, 2021, at his home with his family by his side. A memorial gathering will be held Friday, July 2, 2021 at Law Jones Funeral Home in Lanark from 3pm to 6pm. Family and friends... View Obituary & Service Information

The family of Jeffrey A. Heldt created this Life Tributes page to make it easy to share your memories.

Send flowers to the Heldt family.