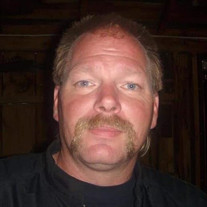 Jeff Balk, age 54, of Thomson, IL, passed away Sunday, September 27th, at Clarissa Cook Hospice House in Bettendorf, IA. Funeral service will be held 2:00 pm Sunday, October 4th, at the Law Jones Funeral Home in Thomson. Visitation will be 10:00 am to 2:00 pm prior to the service. A luncheon will follow the committal service at 3:30 pm at Majestic Pines. People are invited to wear Harley Davidson attire, dress in camo, or dress casually. Jeff was born December 13th, 1965, son of Edwin and Betty (Feldt) Balk. He grew up on a farm just outside of Thomson, down Argo Fay road. Jeff attended Thomson High School, graduating with the class of 1984. In 1992 Jeff married Valerie Kiger. They celebrated seven years of marriage, and remained friends after going their separate ways. Years later, Jeff would meet his special friend, Jeanine. The couple dated up until Jeff’s passing. Jeff had many jobs throughout his life. He worked for Iben Electric when he was young.. He then became a Thomson Police Officer, and served on the force for many years. After retiring from the force, Jeff worked at the meat locker, where he worked until his passing, and for the village of Thomson Public Works. Jeff was an avid Hunter. Using the skills he learned at the meat locker, Jeff would process just about everyone's deer. He would butcher over 100 every year. Jeff loved to golf. His favorite course was Buck’s Barn. Jeff would play on Men’s Night near weekly. When Jeff wanted an adventure he would get on his Harley and drive. He loved to take cross country journeys on his bike. When Jeff was wanting to stay around he occupied his time with canning various vegetables and deer meat, and raising German Shepherds. Jeff will be dearly missed by his sons, Jared (Britney Weets) Balk of Sabula, IA, and Justin (Ashley) Kiger, of Des Moines, IA; his father, Edwin (Sandy) Balk; four siblings, Donna (Mike) Mangler of Savanna, David (Kristi) Balk of Pella, IA, James Balk of Thomson, and Brian (Beth) Balk of Thomson; and his special friend Jeanine. Jeff is preceded in death by his mother Betty, his sister-in-law Tammy Balk, and his four grandparents.

The family of Jeff Balk created this Life Tributes page to make it easy to share your memories.

Send flowers to the Balk family.