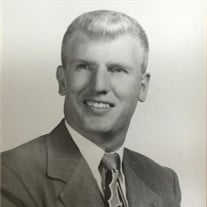 Jason W. Johns, age 96, of Mt. Carroll, IL, passed away Saturday, May 1, 2021 at MercyOne Medical Center, Clinton, Iowa. A Funeral Mass will be held at 11:00 a.m., Wednesday, May 5, 2021 at SS John and Catherine Catholic Church, Mt. Carroll. Visitation will be held from 9:00 to 11:00 a.m., prior to the service at the church. Burial will take place in Savanna Township Cemetery. Memorials may be given in Jason’s memory to SS John and Catherine Catholic Church and the Carroll County Senior Services Organization. Jason was born September 15, 1924, in Savanna IL, the son of Clarence C. and Bernice Edna (Clay) Johns. Jason attended Washington School in rural Savanna, and graduated from Savanna Township High School with the class of 1942. He grew up with his siblings, working on the family farm until enlisting in the US Army Calvary in March, 1945. Jason served with the US Constabulary Services in Germany from 1946 until 1948. In March 1947, the love of Jason's life, Claire Rita Smith, sailed to Europe and joined him. They were united in marriage March 25, 1947 in Paris, France. Jason and Claire enjoyed 69 years of marriage until Claire's passing in January of 2017. Jason and Claire farmed in rural Mount Carroll for many years, while raising their family. In 1971 Jason began working for Production Credit Association as a field agent and later manager of the Mount Carroll branch office. Working with local farmers afforded Jason the opportunity to remain involved in agriculture. Jason retired from Production Credit Association, and enjoyed woodworking, golf, volunteering with the Mount Carroll Ambulance Service, Meals on Wheels and other local organizations. Jason was a member of SS John and Catherine Catholic Church, and received the honors of the fourth degree of the Knights of Columbus. He served on the Carroll County Council on Aging board, retiring earlier this year. Jason and Claire were 4-C Club charter members. They enjoyed a monthly card club for several decades, and loved to dance. Jason enjoyed his prayer group, morning coffee at Charlie's II, and he always looked forward to spending time with his family. Jason will be dearly missed by his three children; Teresa (Jim) Fleming, of Kalona, IA, Jay (Kathy) Johns of Hayward, WI, and Pat (Al) Reynolds of Clinton, IA; five grandchildren, Brent Dykema, Stacy Dykema, Matt Reynolds, Andrea Johns and Chris Johns; two step-grandchildren, Kenny and Kurt Fleming; two sisters, Marie Brkljack and Lorene West, both of Savanna; and many nieces and nephews. Jason was preceeded in death by his parents, sisters Lois Johns, Bettyjo Meador, and Phyllis Bellich; and daughter Margaret Johns.

The family of Jason W. Johns created this Life Tributes page to make it easy to share your memories.

Send flowers to the Johns family.