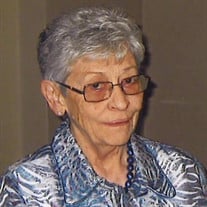 Janet R. Adams of Apple River, IL, passed away Saturday, August 1st, 2020, at Mercy One Hospital in Dubuque, IA. Funeral Service for family will be held between 1:00 and 3:00 pm and for the public between 3:00 p.m. – 4:00 p.m. Tuesday, August 4th, 2020, at the Zion Presbyterian Church in Schapville, IL. A graveside funeral service will be held Thursday, August 6th, 2020, at the Zion Presbyterian Cemetery in Schapville. Janet was born March 6th, 1937, the daughter of Ralph and Mildred (Kohler) Holtzman. She was raised in Miles, IA, and graduated from Miles High School with the class of 1955. She loved sports and was an All Conference basketball player in her high school, playing for varsity as an 8th grader. She was a baton twirler and a drummer in her school band. In high school she met the love of her life, George Adams, from nearby Sabula, Iowa. They began their relationship when Janet was 14 and George was 15 and were very close from the start. After George graduated from Sabula High School he joined the Army and married Janet after returning home from boot camp. George wore his uniform to his wedding, while Janet wore her wedding dress on that July 3rd, 1955. Janet then moved with her new husband to Germany where they stayed for two years before returning to the states in Philadelphia until George started work for the FAA, a job that would take Janet, himself, their son and later their daughter across parts of the United States from Lake Linden and Battle Creek Michigan to Green Bay, Iron Ridge and Sun Prairie Wisconsin, with several stops in Oklahoma City, to Mississippi and to Aurora, Illinois where they remained for 26 years before moving to their current home near their home of origin, Apple Canyon Lake. Together George and Janet raised two children, and this July 3rd celebrated their 65 th wedding anniversary. Janet’s family was the most important thing to her. She loved being a mother and especially being a grandmother and great grandmother. She loved to play cards and was skilled at many games. She loved to watch sports, particularly the Chicago Bulls and Cubs, and the Green Bay Packers. She also had a passion for feeding, watching, and learning about the local birds, and also fishing in Apple Canyon Lake. Janet was also a member of Zion Presbyterian Church in Schapville, was a member of the Ladies Circle, served as a church Shepard, and played in the bell choir. Janet loved the parish, and will be remembered for her quiet dignity and loving nature. Janet will be dearly missed by her husband, George Adams; two children, Doug (Amelia) Adams of Huntsville, AL, and Robin (Chris) Barnes of Woodinville, WA; four grandchildren, Jessica (Robert) Wilson, Elizabeth Spayde-Barnes, Rachel Barnes, and Jonathan Adams; two Great grandchildren, Robert and Jack; two sisters, Barbara (Roger) Leman, and Gloria (Ronnie) Wilcke; and many beloved nieces and nephews from both her side and George’s sides of her family. Janet is preceded in death by her parents, Ralph and Mildred, and her infant granddaughter, Mary.

The family of Janet R. Adams created this Life Tributes page to make it easy to share your memories.

Send flowers to the Adams family.