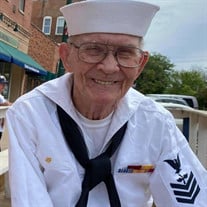 James Berry Williams was one of the oldest WWII veterans in Northwest Illinois. He truly cared about his family, his students and his community his entire life. At the age of 98, Berry passed away on Saturday, December 18, 2021 after a brief stay at Allure Nursing Center of Mt. Carroll. Berry was born October 4, 1923 in Black Mountain, North Carolina, the son of James Barry and Henrietta Roxana (Bailey) Williams. Berry was a rebel as a kid (and his whole life) and ended up being raised by his aunt Lela in Iowa, who could him in line. He enlisted in the US Navy in 1939 at the age of 16. It wasn’t until after he was overseas on the USS Saratoga headed to Hawaii that the Navy found out his age. They decided to keep him and he was able to get his GED. He graduated from Monmouth College with a degree in Psychology in 1951. On May 10, 1946, Berry married Francis Rosalie Stropes. They celebrated 53 years of marriage and raised three children, Cathy, Tim, and Peggy. Some of the fondest times were traveling across country as a family, riding in the Chevy station wagon and camping. Rosalie passed away May 18, 1999. Berry taught at Savanna High School for many years, retiring in 1986. He shared his philosophy, wit and determination with all of his students. If you didn’t learn about life in Berry’s class, you were absent. He always recommended his alma mater to his HS students. (Probably receiving a commission.) He was a member of the Mt. Carroll American Legion and Lions International. He loved to whittle and collect coins and rocks. He especially loved telling stories, having coffee with friends, and tormenting his fellow retired teachers with trivia questions. Berry will be dearly missed by his two daughters, Catherine “Cathy” Williams of Freeport and Peggy (Wayne) Voeller of Milwaukee; and his son, Timothy “Tim” (Tami Burgi) Williams of Las Vegas, Nevada and a granddaughter, Rachel Williams. Berry is preceded in death by his wife, Rosalie; six siblings; and both parents. A Celebration of Life service and gathering will be held the week before Memorial Day which was his favorite holiday. Burial of ashes will be in Oak Hill Cemetery at that time with full military rites. Memorials may be given in Berry's honor to the West Carroll Education Foundation, or the USO by visiting: https://www.uso.org/donate/donate-in-honor/?sc=WS15IMIHG1&utm_campaign=TNDigital&utm_medium=PaidSearch&utm_source=SL-Google&gclid=EAIaIQobChMIvKmlyeL19AIV7m5vBB1N7AnAEAAYASACEgLls_D_BwE

James Berry Williams was one of the oldest WWII veterans in Northwest Illinois. He truly cared about his family, his students and his community his entire life. At the age of 98, Berry passed away on Saturday, December 18, 2021 after a brief... View Obituary & Service Information

The family of James Berry Williams created this Life Tributes page to make it easy to share your memories.

James Berry Williams was one of the oldest WWII veterans in Northwest...

Send flowers to the Williams family.