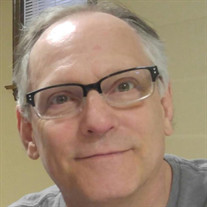 James Curtis Scharman, age 60, of Shannon, passed away unexpectedly at home Tuesday, December 22, 2020. Visitation will be held Saturday, December 26th from 12 noon until the time of the funeral service at 2 p.m. at the Simply Free Church, 25460 Locust Road, Lanark, with burial in the Brethren Cemetery, Shannon. Memorials may be given in Jim’s memory for the Shannon Fire and Ambulance Departments, PO Box 549, Shannon, IL 61078. Jim was born May 9, 1960 in Freeport, the son of James Henry and Maurita Jean (Manworren) Scharman. He was a 1978 graduate of the Shannon High School. After high school, Jim attended Highland Community College, 1978-1979, studying digital logics and circuits. In the fall of 1979, he transferred to Purdue University to pursue a degree in electrical engineering technology. During the spring of 1981, Jim moved to Center City, MN, where he lived until moving to River Falls, WI in 1982. Jim went on to study and receive his degrees majoring in Computer Science and minors in Liberal Arts and Mathematics from the University of Wisconsin at River Falls, graduating with the Class of 1985. Jim worked 18 years for the Westlaw Division of the West Publishing Company in St. Paul, MN. At Westlaw, he began his career in computer programming, after several years he transitioned to work in Customer Service, helping law firms to integrate the Westlaw software enabling attorneys’ quick reference in their legal research. In 2003, after the passing of his father, Jim moved back to Shannon to live close to his mother, Maurita. Jim struggled with mental illness and addictions in his adult life, but always tried to make the best of it. In the last several years he had maintained a level of stability that provided him with a better quality of life. He appreciated the caring assistance given by his friend and care-taker, Marty Niesman. Some of his most cherished moments were with his family, taking trips with parents, spending time with Mom, and caring for “Cat” his cat of many years. Jim will be dearly missed by his mother, Maurita Scharman of Freeport; his brother, Karl (Donna) Scharman of Rolling Meadows; two nephews, Austin and Kaleb; and his “adopted” siblings, Patrick Fortune and Debbie (Bruce) Anderson. He was preceded in death by his father, Jim in 2003. Please remember and pray for those who struggle with mental illness and addiction. It’s a hard life.

James Curtis Scharman, age 60, of Shannon, passed away unexpectedly at home Tuesday, December 22, 2020. Visitation will be held Saturday, December 26th from 12 noon until the time of the funeral service at 2 p.m. at the Simply Free Church,... View Obituary & Service Information

The family of James Curtis Scharman created this Life Tributes page to make it easy to share your memories.

Send flowers to the Scharman family.