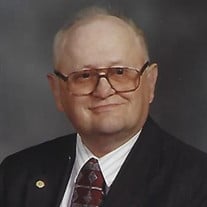 James “Jim” Lawerence Rose, age 86, of Mt. Carroll, Illinois, passed away on January 8, 2021 at Swedish American Hospital in Dekalb, Illinois, where he resided with his daughter and her family. A graveside funeral service will be held proceeding a visitation from 9:30-11 am on Saturday, January 16, 2021 at Law-Jones Funeral Home, Mt. Carroll. Burial will take place in Lanark Cemetery, Lanark, Illinois. A memorial has been established. Family and friends are invited to share in Jim’s life at www.lawjonesfuneralhome.com. Jim was born September 25, 1934, in Morrison, Illinois, to Martin and Elizabeth (Juist) Rose. He graduated from Morrison High School in 1952. On January 15, 1956, Jim married Mary Ellen Pitts. Together they raised four children and celebrated 63 years of marriage. Jim was a silent, humble, yet stubborn Dutch man. He believed in hard work, having faith and giving back to his community. He served during the Korean War, despite not seeing war, was proud to serve his country and was most times seen wearing his hat proudly. He worked as a machinist with The Savanna Army Depot, where he devoted 30 years. He also volunteered as a 4H leader and Sunday school teacher. He served on the City Council of Mt. Carroll (Ward 1); and he was chairman of the police and ADA committees. He also enjoyed metal work during his lifetime. He is remembered by his grandchildren for his stories and sayings. He was proud of his community and his time in the service, but most of all the time he lived through sickness with a body temperature of 108 degrees, which every nurse has heard through his lifetime. He also liked to prank his grandchildren and could always be heard saying, “I don’t get mad, I get even”. Jim will be missed dearly by his family; two sons, David (Mary Ann) Rose of Dekalb, Illinois and Duane (Lowletta) Rose of Roseburg, Oregon; daughter Cynthia (Steven) Rae of Dekalb, Illinois; 10 grandchildren, Elizabeth, Juanita, Gretchen, Eric, David, Allen, Makala, Michael, Kortnie and Jessica; 14 great-grandchildren, Kaytelynn, Levi, Nathan, Rose, Landon, Peyton, Benjamin, Natalie, Matthew, Abigail, Hannah, Lillian, Autumn, Alaric (to arrive any day); and sister, Jeanne Crossland, of Sterling, IL. Jim is preceded in death by his parents Martin and Elizabeth; wife Mary Ellen (Pitts); daughter Denise; sister Eleanor (Pickens); infant brother David; brother in law Gary Crossland; grandson Ryan; and a granddaughter, Amanda.

James &#8220;Jim&#8221; Lawerence Rose, age 86, of Mt. Carroll, Illinois, passed away on January 8, 2021 at Swedish American Hospital in Dekalb, Illinois, where he resided with his daughter and her family. A graveside funeral service will be... View Obituary & Service Information

The family of James L. Rose created this Life Tributes page to make it easy to share your memories.

Send flowers to the Rose family.