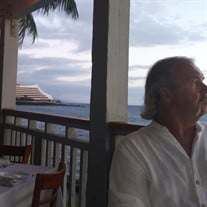 James Lawrence Nelson of Mt. Carroll, IL (formerly of Rockford, IL and Janesville, WI) was born December 28, 1951 in Monroe, Wisconsin and gained his well-deserved eternal reward on April 24, 2021 surrounded by love at the Serenity Hospice Home in Oregon, IL. His parents were Betty Ellen Starr and Norman Burton Nelson and his siblings were the light of his early and continual years. He remained close with them his entire life. He spent his younger years in the Browntown, WI and Sarasota, FL areas. He married Judy Eno in 1970 and they had two children, James and Jacqueline. He later married Sharie Eisfeller in 1988 in Rockford, IL Jim was an auto assembler at Chrysler in Belvidere for 30 years and was never so happy as the day he retired (no more 3:30 am alarms ringing)! He enjoyed woodworking and home remodeling and he was a crossword puzzle solver extraordinaire. He adored all of the dogs and cats that he and Sharie loved and gave homes to over the years. It was Sharie’s fault that he became a Chicago Bears fan (they held season tickets for 15 years) and thus he endured a torturous NFL football season almost every year. He enjoyed going to his grandson’s baseball games in Rockford, seeing his granddaughter become a wonderful and responsible mother and talented student as she pursued higher education, was blessed to discover a daughter later in life and be able to get to know her, and loved seeing his son grow into the caring, kind and generous man he is today! Jim and Sharie loved traveling all over the U.S. and to other countries. They enjoyed the theatre very much. They always tried to catch their theatre-major nephew’s plays and TV appearances and enjoyed going to plays and musicals mainly in Chicago and Rockford but in 2019 they made it to the West End of London and saw two shows and in 2020 saw a show with friends in the Kona, HI area. He so enjoyed making an intricate wood motorcycle rocker for his adorable great nephews and their wonderful Mom and Dad. Friends and family will remember him as hardworking and a guy that would do anything for you and often did. Sharie found her best possible companion in life in him. He is survived by his wife Sharie, son James, daughter Jacqueline, daughter Rhonda (Jim) Gorman, 10 grandchildren, 4 great grandchildren, best friend James Jacobs, precious Aunt Irene, treasured nephews and nieces, cousins, and siblings: Donald Nelson, Brodhead, WI, Richard (Judy) Nelson, Monroe, WI, Edward (Karen) Nelson, South Pittsburgh, TN, Mary (Ed) Bandi, Janesville, WI, Norma (Ray) Radloff, St. Petersburg, FL, and Linda Martin, Thomasboro, IL. He was predeceased by his Mother, Father, sister Norma Jean, brother John, sister Nancy, and Aunts and Uncles. A private family Celebration of Life will be held at a later date. The family requests that any memorial gifts be directed to Serenity Hospice Home, Oregon, IL.

The family of James Lawrence Nelson created this Life Tributes page to make it easy to share your memories.

Send flowers to the Nelson family.