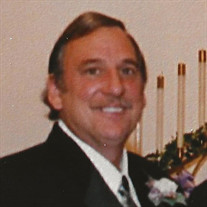 A man with a perfect heart gives all of love to his family, friends and community. James Albert Mills was such a man. On May 23, 2020 at the age of 71, Jim went to be with his Lord after a brief illness. A private family service will be held on Friday. You may watch the service from your home on Facebook Live at 2:30 pm, Friday, May 29, 2020, or any time after, by going to the Law-Jones Facebook page and joining Jim’s group. Jim was born July 21, 1948 in Savanna, the fourth of ten children of Robert Issac and Charlotte Maudene (McKinley) Mills. He grew up near Hanover, loving the country, the farmland, and creating mischief. Jim attended the Lost Mound Country School and graduated with the Class of 1965 from the Hanover High School. He wasn’t a sports guy in high school, but he did take the lead in the school play “The Many Loves of Dobie Gillis.” He then met his true love, Sharon, and on February 14, 1970, Jim married Sharon Gotschall. She was drawn to his sense of humor, fun, and the fact that he liked to talk and share with her. They raised two children and celebrated fifty years of marriage. Jim liked to tell stories and spend time with family. He gained an education and love of mechanics from his father. In 1971, he and Sharon began a successful business, East Savanna Welding & Repair. She did the books, and he did the story-telling and repair. He retired in 2012, after surviving a massive stroke. He was able to live a quality life since then, after working hard at rehabilitation, his strength and his family carried him through. At the end of his life, Jim succumbed to congestive heart failure. Jim’s favorite part of running the business was Friday nights when many of his friends and customers would stop by to socialize. He loved cars, especially proud of his 1970 Mustang and later his 1972 Pinto converted to a racecar with a Starsky and Hutch motif. He was partial to Fords. Jim will be dearly missed by his wife Sharon of Savanna; his son, Brian (Angela) Mills of Urbandale, Iowa; his daughter, Andrea (Terry) Feller of Preston, Iowa; three grandchildren, Emilia and Isaac Feller, and Logan Mills; eight siblings, Carlton (Joan) Mills of Champaign, Illinois, Lt. Col. Ret. Peter Mills of McAlester, Oklahoma, Doug (Cathy) Mills of Alachua, Florida, Andrew Mills of Thomson, Susan (Jackson) Greathouse of Reedy, West Virginia, Jane (Charles) Ciorba of Fairfax, Virginia and Debbie Mills of Popomac, Illinois and Phillip (Lisa) Mills of Savanna; a sister-in-law, Cheryl Mills of Dixon; and many nieces and nephews. Jim is preceded in death by both parents and his brother, J. Richard Mills.

A man with a perfect heart gives all of love to his family, friends and community. James Albert Mills was such a man. On May 23, 2020 at the age of 71, Jim went to be with his Lord after a brief illness. A private family service will be held... View Obituary & Service Information

The family of James Albert Mills created this Life Tributes page to make it easy to share your memories.

A man with a perfect heart gives all of love to his family, friends...

Send flowers to the Mills family.