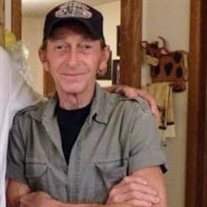 James D. Huffine, of Savanna, IL, passed away Friday, January 14th, at FHN Hospital in Freeport, IL. Graveside committal service will be held at 11:00 a.m., Saturday, May 14, at Spring Lake Cemetery in Savanna, IL. Jim was born March 27th, 1945, son of Albert and Alene (Hardy) Huffine, in North Carolina. He was raised by his stepfather in Tacoma, Washington, before moving with his family to Germany for three years. After moving back to the United States, Jim's family settled down in Savanna. Jim Attended Savanna High School and graduated with the class of 1966. After graduating Jim began his lifelong career as an iron worker. In 1969 Jim married Naomi Foley. Together they raised two daughters and celebrated 39 years of marriage until Naomi's passing in 2008. Later in life Jim met Wendy Klein. The couple hit it off, and were together for 10 years until Jim's passing. For Jim's entire life he worked as an iron worker. He loved his profession and is responsible for getting many younger men into the trade, including a family member. At one point Jim fixed all of the light poles lining the streets of downtown Savanna, for free. He also worked on the Thomson Prison, and the Savanna bridge. Using his expertise, Jim built his family's home, which brought him great pride. Jim was a member of Local 111 for over 40 years. In his spare time Jim loved the outdoors, especially when he was fishing, trapping, or hunting for mushrooms. Jim and his family spent many summers going up the river, and spending time at the Savanna Army Depot. Jim was a big John Wayne fan, and visited John Wayne's birthplace in Winterset, IA. He loved to take trips with Wendy in his corvette, driving along the coast by Biloxi, MS. Jim was a friend to everybody. Everyone loved him, and he loved everyone. At the center of his life was his family. Jim was blessed with many women in his life, including many sisters, daughters, and cousins. His big heart and kind nature lives on through those he’s left behind. Jim will be dearly missed by the love of his life, Wendy Klein of Savanna; two daughters, Trisia (Greg) Barr of Savanna, and Jammie (Bob) Barten of Savanna; nine grandchildren and four great-grandchildren; five siblings, Darline Pedersen of Albany, WI, Meta Combs of Oxford, MS, Debbie Peterson of Tucson, Arizona, Dreva (Jim) Dickey of Water Valley, MS, and Johnnie (Rhea Badger) Ross of Grand Rivers, KY; and many nieces, nephews, in-laws, family, that he loved. Jim is preceded in death by his parents, Albert and Alene; wife, Naomi; and stepfather, Johnny C Williamson.

The family of James D. Huffine created this Life Tributes page to make it easy to share your memories.

Send flowers to the Huffine family.