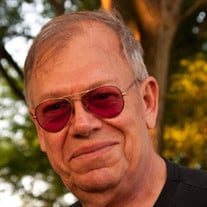 James Edward “Jim” Fecke, 73, of Savanna, Illinois, passed away peacefully from natural causes on March 12, 2020, at Allure of Mount Carroll. He was born February 22, 1947, in Chicago, Illinois. Jim’s sense of humor and kindness will be missed by all who knew him. Jim Fecke served as a Staff Sergeant in the United States Air Force from 1967 to 1972, serving as an Automatic Flight Controls System Specialist; he was stationed at Hickam AFB in Honolulu, as well as Yakota AFB in Japan and Wake Island. He later worked as a flight instructor, as well as an electrician for the Canadian Pacific Railroad. In his later years, Jim was an avid freelance photographer. Jim was also a ham radio operator, woodworker and pool player, and a member of Mensa and the Railroad Workers’ Union. Jim graduated from Mount Carroll High School in Mount Carroll, Illinois, and attended Highland Community College in Freeport, Illinois. Survived by his brother, Robert (Kay) Fecke of Lakeville, Minnesota. He is also survived by his nephew, Jeffrey Fecke, and his daughter, Katherine, and his niece, Jennifer (Craig) Pittman, and her daughters, Anna and Emma, all of Lakeville, Minnesota. Jim is also survived by cousins Paul Fecke of Germantown, Wisconsin, Linda Fecke of Belvedere, Illinois, Jack Charleton of Lanark, Illinois, Daniel Charleton of Davie, Florida, and their families. He was preceded in death by his parents, John and Betty Fecke, of Mount Carroll, Illinois. Jim’s family wishes to thank Dr. David Reese, FHN Hospice and the staff of Allure Mount Carroll for their care. They also wish to thank Mike Ritchie, Bill Shaw, and many others for their friendship and support of Jim. Services are being postponed and an announcement will be made at a later date. In lieu of flowers and memorials, donations are encouraged to a charity of your choice.

The family of James E. Fecke created this Life Tributes page to make it easy to share your memories.

Send flowers to the Fecke family.