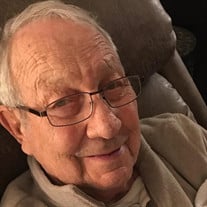 It is with a sad heart that we announce the passing of Jack J. Marken. Jack passed away in his home on November 1st at the age of 92. He was born in Savanna, Illinois on October 30th, 1929 and married Diana Diehl on July 27th, 1950, making Thomson, Illinois their home. Jack was known by many for his sharp wit and playful teasing. Jack’s roots ran deep in the community. He served his country in the Illinois National Guard during the Korean Conflict and was honorably discharged in 1950. His lengthy career then began as a switch tender for the Milwaukee Railroad followed by employment with the Diehl Oil company here in Thomson. Jack then worked for DuPont at the Clinton Iowa and Circleville Ohio plants from 1969 until he retired in 1984. Jack continued to work after retirement, owning and operating the Diehl Drive-In in Thomson with his wife Diana. He worked as a carpenter and painter throughout his time and even took on the challenge of painting the Thomson water tower many years ago. When Jack did a job, it was done right, he was very proud of his work ethic. Jack was a charter member of the Thomson Chamber of Commerce, served on the Thomson Village and the Thomson United Methodist Church boards, and was a member of the Lions Club. Jack enjoyed many years traveling between Illinois, Iowa and Florida, creating a million memories and laughs with his family. Jack is survived by his wife of 71 years Diana, his three daughters Gail Okulczyk (Thomas), Nancy Smith (Steven) and Barbara Hovey, his seven grandchildren, Matthew, Nathaniel, Lucas, Joel, and Stephanie Smith (Keil) and Daniel and Kelly Hovey, two great-grandsons, Colt Keil and Daniel Hovey Jr and Jack’s brother James. He has watched us grow and mature into husbands and wives and was fortunate enough to share the first three and a half years of his great grandson Colt’s life. We couldn’t have asked for a better husband, father, grandpa or, as Colt would say, “Old PaPa”. We feel truly blessed to have had him in all our lives for so many years and find comfort knowing he was called home. Preceding his death were his parents James and Helen (Lister) Marken, his twin brother Gene, brother Donald, and sister Mildred Witt, as well as many of his closest friends.

It is with a sad heart that we announce the passing of Jack J. Marken. Jack passed away in his home on November 1st at the age of 92. He was born in Savanna, Illinois on October 30th, 1929 and married Diana Diehl on July 27th, 1950, making Thomson,... View Obituary & Service Information

The family of Jack J. Marken created this Life Tributes page to make it easy to share your memories.

It is with a sad heart that we announce the passing of Jack J....

Send flowers to the Marken family.