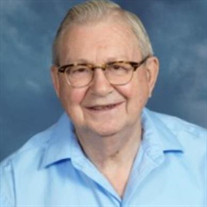 Henry Grishkowsky, 92, of Dubuque, Iowa, passed away Friday, March 25, at Hospice of the Valley in Glendale, Arizona. A funeral service will be held at 11:00am on Monday, April 4, at Trinity Lutheran Church, 8393 South Derinda Road, Elizabeth, Illinois, with Pastor David Russell and Pastor Paul Amlin officiating. Friends may call from 9-11:00am at the church prior to the funeral service. Burial will be in the Trinity Lutheran Cemetery. Henry was a member of Trinity Lutheran Church in Derinda and an associate member of Lord of Life Lutheran Church, Dubuque, Iowa. Henry John Grishkowsky was born in a sod roofed house on the prairie of rural Beulah, North Dakota. He was the third son of Martha Gramm and Reinhart Grishkowsky. The date was Easter Sunday, April 7, 1929. The family spent the following very cold winter in North Dakota, but then went to California to stay with grandparents to escape the weather and the hardships of the Great Depression of the early 1930’s. The family later returned to their North Dakota land, financially able to plant wheat, feed beef cattle and mine the coal resources, which served the family well. Henry attended Beulah Community Schools from first grade through high school graduation. Continued education took him to Concordia College in Moorhead, Minnesota. From his second year of college to graduation he was a pre-theology student at Wartburg College in Waverly, Iowa. In the fall of 1951, he entered Wartburg Seminary in Dubuque, Iowa. It was here, in a church young peoples’ meeting, that he met his future wife, Rosebud Hyink, then a college nurse and junior at the University of Dubuque. During his years of study, he was the District President of the entire Luther League of South Dakota, North Dakota and part of Canada. This honor was relinquished when he began his parish ministry. Henry went on internship for his third year of theological study at Zion Lutheran Church in Aberdeen, South Dakota. Having completed that requirement, he returned to Dubuque, then took Rosebud to her home in Palos Park, Illinois, where they were married on June 19, 1954. The couple made their first home in a small apartment in Dubuque, Iowa. Henry had part time work at the Eagle Grocery Store and Rosebud worked the summer for the Visiting Nurse Association. Following their graduations and having received his first call to St. Paul Lutheran Church in Hanover and Trinity Lutheran Church in rural Derinda, Illinois, Henry was ordained in Zion Lutheran Church in Beulah, North Dakota on June 12, 1955. He was installed in Hanover and Derinda on July 10, 1955. He and Rosebud served 42 ½ years in their first and only call, where every member was precious. Just prior to retirement, Pastor Henry was honored with an award of Pastor Emeritus by his congregation. The service of closure took place on October 26, 1997. Pastor Henry and Rosebud retired in December 1997, and moved to Sunset Park Place in Dubuque, Iowa. Henry was a kind and gentle man, who devoted many of his early years of retirement to the loving care of his wife, Rosebud. In his later years, Henry enjoyed spending his winters in Glendale, Arizona. Henry was much loved and will be dearly missed by all who knew him. Henry is survived by his brother, Glen (Becky) of Glendale, Arizona, a sister-in-law, nieces, nephews, cousins, and many very special friends. He was preceded in death by his parents, his beloved wife, his brothers Eldon and Delmar, a brother-in-law, and two sisters-in-law. Memorials may be given to Trinity Lutheran Church in Derinda, Illinois, Lord of Life Lutheran Church in Dubuque, Iowa, or a charity of your choice.

Henry Grishkowsky, 92, of Dubuque, Iowa, passed away Friday, March 25, at Hospice of the Valley in Glendale, Arizona. A funeral service will be held at 11:00am on Monday, April 4, at Trinity Lutheran Church, 8393 South Derinda Road, Elizabeth,... View Obituary & Service Information

The family of Henry John Grishkowsky created this Life Tributes page to make it easy to share your memories.

Send flowers to the Grishkowsky family.