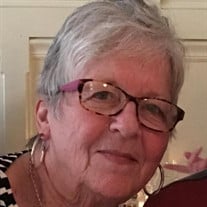 Heidrun “Heidi” David of Warren, IL, formerly of Savanna, IL, passed away Thursday, August 19th, 2021 at the Monroe Clinic in Monroe, WI. A celebration of Heidi’s life will be held at 4:30 p.m., Saturday, September 11, 2021 at Law-Jones Funeral Home, Savanna. Visitation will be held from 2:30 to 4:30 p.m. prior to the service at the funeral home. Heidi was born April 14, 1943, in Saalfeld Germany, daughter of Werner and Ida “Ilsa” (Litzinger) Schlegel. She grew up behind the Iron Curtain in Eastern Germany. Life was tough under communism, but Heidi’s loving family made the best of their situation. At the age of 12, Ilsa took Heidi on a daring journey to Western Germany for the promise of a better life. It was in the west where Heidi would find more opportunity and freedom for herself. When she was 18, Heidi took a trip to visit family in Eugene, OR. She fell in love with America and decided to become a permanent resident. Adjusting to a new place and way of life was tough, but Heidi adapted quickly and well, teaching herself English with the help of her favorite soap operas. She then moved to California where she met the love of her life, Bill David. The couple fell in love quickly and became married in 1965. Together Heidi and Bill raised two children, and celebrated 53 years of marriage until Bill’s passing in 2018. Heidi was incredibly handy and hard working. She could fix most things and loved to make improvements on her “fixer upper” home. She would do the electrical, knock down walls, gut old rooms, any and all of the repairs and renovations she could do herself. For many years Heidi worked as a welder at Alco. In the late 80s she changed careers and began working at the RIA Credit Union in Savanna. At the center of Heidi’s life was her family. Family camping trips on the river were always a favorite way to spend time with those she loved. Heidi especially loved being a grandmother and great-grandmother. Heidi showed her love through the food she made. She would often make old German favorites such as schnitzel, German goulash, potato balls, and her famous peach torts. Heidi was selfless when it came to her family. Heidi will be dearly missed by her two children, William H David Jr. of Roscoe, IL, and Denise P. (Tim) Brinkmeier of Warren; three grandchildren, Jared W. Brinkmeier of Warren, Lindsey H. Brinkmeier of Warren, and Nikolaus David Brinkmeier of Warren; one great grandchild, Leighton Brinkmeier; and one sister, Bärbel Ernst of Biebrich, GR. Heidi is preceded in death by her loving husband William H. David, and her parents Werner and Ilsa & stepfather Aloise Weigert.

The family of Heidrun "Heidi" David created this Life Tributes page to make it easy to share your memories.

Send flowers to the David family.