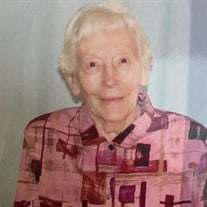 Hazel Delores (Lepien) Daehler passed into eternity Friday, March 18, 2022 at Resthave Nursing Center in Morrison, Illinois. She was born on October 13, 1925 in Hartford, Wisconsin, the daughter of Arthur J. and Sarah Schauer Lepien. She was baptized December 6th, 1925 and confirmed in 1938 in the Evangelical Church. She attended elementary and high school in Hartford and graduated in 1943. Hazel attended North Central College in Naperville and graduated in 1947. She spent one year as the Christian Education Director in Johnstown, Pennsylvania. She then returned to North Central College to earn enough credits to teach music, which then led her to Chadwick where she taught music in the Chadwick Public School for a year. Hazel married Arlowe Daehler on June 11, 1950 and they settled on the Daehler family farm; later purchasing it from Arlowe’s parents and receiving the designation of a Centennial Farm. After their children were in school, she taught private kindergarten for 10 years in Chadwick. Hazel was blessed with a soprano voice and sang at many weddings, funerals and other church functions. She was also soloist for the Messiah and The Seven Last Words. She was active in the First Lutheran Church serving as the first primary Sunday School Superintendent, literature secretary, Choir Director of Junior and Senior choirs, a member of the care team and was organist for 45 years. She also helped make many quilts for Lutheran World Relief. Hazel enjoyed gardening, sewing, reading, and making raisin pies for church functions. She was preceded in death by her parents, husband, daughter Sara, two brothers and one sister. Hazel leaves behind to cherish her memories, her son John of Lanark; daughter Ruth (Matt) Siemert of Morrison; two granddaughters, Lynn Siemert and Jessica (Dan) Payette; son-in-law Dave Merchant; sister-in-law Joyce Daehler;many nieces and nephews; and her church family. A funeral service will be held 10:30 am Thursday, March 24, 2022 at the First Lutheran Church in Chadwick. Visitation will be prior to the service from 9:30 – 10:30 am Thursday, March 24 at the Church. Burial will be in the Chadwick Cemetery. You may watch the service on the First Lutheran Church, Chadwick facebook page. Memorials may be given in Hazel’s memory to benefit the First Evangelical Lutheran Church in Chadwick.

Hazel Delores (Lepien) Daehler passed into eternity Friday, March 18, 2022 at Resthave Nursing Center in Morrison, Illinois. She was born on October 13, 1925 in Hartford, Wisconsin, the daughter of Arthur J. and Sarah Schauer Lepien. She was... View Obituary & Service Information

The family of Hazel Delores (Lepien) Daehler created this Life Tributes page to make it easy to share your memories.

Send flowers to the Daehler family.