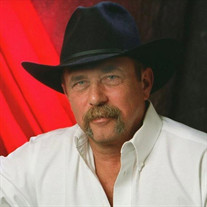 Harvey James Kloss, age 72, of Elizabeth, IL, passed away, Saturday, March 7, 2020, in his home surrounded by family. A funeral mass will be held Monday, March 16, 2020, at 11am, at St. Mary's Catholic Church in Elizabeth, IL, with burial to follow at St. Mary's Catholic Cemetery. Visitation will take place from 5pm to 7pm, Sunday, March 15, 2020 at Law Jones Funeral Home in Elizabeth, as well as one hour prior to Monday's mass, at the church. Harvey was born September 3, 1947 in Savanna, IL, the son of Cyril and Leona (Groezinger) Kloss. He attended Elizabeth schools, graduating from Elizabeth High School with the class of 1965. Following school he went into the Electrician trade, owning and operating Northwest Electric for more than 50 years. He was dutifully devoted to his business and his employees. Harvey was at the shop every morning to see his guys off, until a broken ankle and ALS stripped him of much of his independence. Harvey had a great love of horses and centered much of his life around them. He was a member of the Elizabeth Saddle Club and enjoyed riding, showing, and training and breeding them. He sold his horses all over the country, and even took his horse sales as far as Germany. But it was family that Harvey loved most. He adored his grandchildren, often taking them to the Broken Yolk for his morning routine of breakfast and coffee, and family get togethers were where he was at his happiest. Harvey will be dearly missed by his four children, Matt (Danielle) Kloss, of Elizabeth, IL, Tony (Sheree) Kloss, of Elizabeth, IL, Mitch (Amanda) Hopkins, of Seward, IL, and Teri (Donald) Shellenberger, of Elizabeth, IL; and his 13 grandchildren. Harvey is preceded in death by his parents, Cyril and Leona and brothers, Robert, Russell, Stanley, and Tom Kloss.

Harvey James Kloss, age 72, of Elizabeth, IL, passed away, Saturday, March 7, 2020, in his home surrounded by family. A funeral mass will be held Monday, March 16, 2020, at 11am, at St. Mary's Catholic Church in Elizabeth, IL, with burial to... View Obituary & Service Information

The family of Harvey James Kloss created this Life Tributes page to make it easy to share your memories.

Send flowers to the Kloss family.