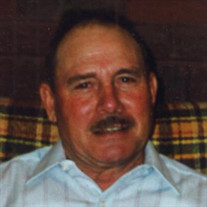 Harlan Alfred Haug, age 88, of Elizabeth, IL, passed away in the early morning hours of Tuesday, September 14, 2021, at Midwest Medical Center, in Galena, IL. A funeral service will be held at Trinity Lutheran Church in Derinda Twp, at 11am, on Saturday, September 18, 2021. Visitation will take place on Friday, September 17, 2021, from 4pm to 6pm at Law Jones Funeral Home, in Elizabeth, as well as at Trinity Lutheran Church, one hour prior to Saturday’s service. Harlan was born May 20, 1933 in Elizabeth, IL, the son of Louis and Lavina (Groezinger) Haug. He grew up in Derinda Center and graduated from Stockton High School with the class of 1951. Shortly thereafter, Harlan enlisted in the United States Army, dutifully serving his country in the Korean War. After his time in the Army, Harlan returned to work the family beef and dairy farm, with his father. He married Kay Karnes, and together they had two daughters. Always a hard worker, Harlan gave many decades to that farm, ultimately taking over chief duties from his father. Most of Harlan’s life was defined by his work ethic. He kept contributing to the farm well into old age until heart problems ultimately prohibited him, much to his dismay. When he found time for leisure, he could be found hunting and fishing in his younger years, or attending his children’s activities and events. He was active in his Church, a participant in Card Club, and a member of the Jo Daviess County Soil and Water Conservation Board and the Jo Daviess County Beef Producers Association. In 2000, Harlan married Patricia Kincaid. In the twilight of his life, he and Pat enjoyed dinner, dancing, and attending plays at Timber Lake Playhouse. Harlan will be dearly missed by his wife, Pat; two daughters, Ronda Glenn, of Wilburton, Ok and Rovay (Russell) Brownlee, of Wilburton, OK; five grandchildren, Chris (Alana) Rowland, of Las Crusas, NM, Kendall (Jordan Caldwell) Glenn, of McAlester, OK, Charles (Sharni) Glenn III, of Red Oak, OK, Caitlin (Joshua) Parker, of Wilburton, OK, and Conor Brownlee, of Wilburton, OK; seven great grandchildren, Logan, Brody, Owen, Cody, Scarlett, Jordan, and Sadey; a sister, Charlice Offenheiser, of Elizabeth, IL; two step daughters, Tammy (Bruce) Brown, of South Carolina and Diane Roling, of Florida; many step grandchildren and great-grandchildren; and many nieces and nephews. Harlan is preceded in death by his parents, Louis and Lavina; the mother of his children, Kay Karnes; and brother-in-law, Melvin Offenheiser.

Harlan Alfred Haug, age 88, of Elizabeth, IL, passed away in the early morning hours of Tuesday, September 14, 2021, at Midwest Medical Center, in Galena, IL. A funeral service will be held at Trinity Lutheran Church in Derinda Twp, at 11am,... View Obituary & Service Information

The family of Harlan A. Haug created this Life Tributes page to make it easy to share your memories.

Send flowers to the Haug family.