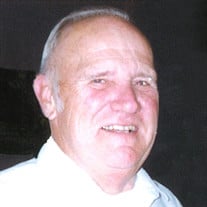 Hal D. Hoy, age 85, of Thomson, IL, passed away Sunday, September 6th, at Mercy One Medical Center in Clinton, IA. Per Hal’s request, a private family memorial service will be held at a later date. Memorials may be made out to the Thomson Community Fund or the Mississippi Flyaway Club. Hal was born February 23rd, 1935, son of Clem and Esther (Plattenberger) Hoy. Hal grew up around the Thomson/Argo Fay area. He attended York Community High School, graduating with the class of 1952. While at York Community, Hal met the love of his life, Erma Erling and soon after graduation the couple married in 1953. Hal and Erma raised five children and celebrated 56 years of marriage until Erma’s passing in 2009. Of great importance to Hal was providing for his family. He was known for his incredible work ethic. Some have said Hal was a jack of all trades and a master of many. He did mechanic work for Lanning Ford, IL DOT plowing snow, as well as Job Corps. He worked for the Thomson School District for much of his life, providing maintenance, mechanic, and all around handy man services. In the small family garage, known for local gatherings, Hal freely offered his time and talents to family, friends, and neighbors needing car repairs. Hal also served his community as a volunteer fireman, first responder and also served two separate city board terms. Hal enjoyed hunting and fishing as well as being a lifelong NRA benefactor. Hal's love of nature extended to animals, especially his faithful sidekick, Heidi. Heidi was at Hal's side 24 hours a day. Hal was a great father and provider. He taught his children hard work, and generosity. If anyone needed anything, Hal would go out of his way to help them, even to a fault. He was a straight shooter, and always told it how it was. He shared his gifts with young men in the community, acting as a mentor changing many young lives for the better. Hal will be dearly missed by his five children, Vicki Zink of Savanna, IL, Randi (Dee) Hoy of Bigelow, AR, Mark Hoy of Clinton, IA, Tammy Byrnes (Kenny) of WI, and Bonnie Dunn (Doug) of Thomson; 11 Grandchildren, 11 great-grandchildren, and three great-great-grandchildren; and his trusty sidekick, Heidi. Hal is preceded in death by his wife Erma; his parents, Clem and Esther; and four siblings, Betty Baily, Mildred Stiles, Laura Jensen, and John Hoy.

Hal D. Hoy, age 85, of Thomson, IL, passed away Sunday, September 6th, at Mercy One Medical Center in Clinton, IA. Per Hal&#8217;s request, a private family memorial service will be held at a later date. Memorials may be made out to the Thomson... View Obituary & Service Information

The family of Hal D. Hoy created this Life Tributes page to make it easy to share your memories.

Send flowers to the Hoy family.