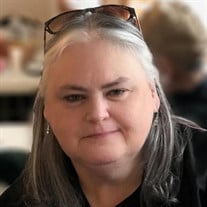 Gloria A. Hamilton, age 64, of Savanna, IL, passed away Monday, July 5, 2021, at University of Iowa Hospital in Iowa City, IA. Gloria was born July 30, 1956, in Clinton, IA, the daughter of Robert and Gertrude (Greaves) Van Horn. She attended Sabula schools, graduating from Sabula High School with the class of 1974. Gloria married Terry Hamilton, and together they had a daughter. Gloria worked for the speaker factory in Sabula and later, the Fulton Corporation. She then made the move to Big Meadows Nursing Home, serving as the head dietary cook from 1980 to 2003. Gloria enjoyed collecting jewelry and listening to country music. She also had a great interest in genealogy. She spent many hours tracing her family’s roots and developed such an affinity for the hobby, that there was a good chance she could tell you a little something about your roots too! Most of all though, Gloria loved her family. She treasured them, and loved to spend time visiting and cooking for them, whenever she had the chance. Gloria will be dearly missed by her daughter, Ashley (Corinna Flammang) Hamilton, of Savanna, IL; brothers, Ronnie (Joanne) May, of Marshall, MI, Dennis (Linda) May, of Clinton, IA, and David (Shelba) Van Horn, of Charlotte, IA; sisters, Kathy (John) Kustes, of Hauntown, IA, Myrna (Ned) Stoltenburg, of Maquoketa, IA, and Brenda (Sy) Andresen, of Clinton, IA; as well as many nieces and nephews, and her dog, Brooklyn. Gloria is preceded in death by her parents, Robert and Gertrude; husband, Terry; and sister, Connie (infant).

The family of Gloria A. Hamilton created this Life Tributes page to make it easy to share your memories.

Send flowers to the Hamilton family.