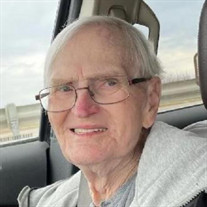 Glen L. Shaw Jr., 88, Elizabeth, snuck away from us peacefully on Friday, June 17th, 2022 at Galena Stauss Senior Care Center, his home for the past 8 months. He had loved ones and caring staff at his side. Glen (Junior) was born March 2, 1934 in Elizabeth, the son of Mary (Williams) and Glen L. Shaw Sr. (Skinny). On August 1st, 1954 he married his sweetheart from Elizabeth High School, Glynn Ellen Stadel, daughter of Mildred (Mitchell) and Leonard Stadel. They were both only children and one was as stubborn as the other. Together they did an amazing job raising their 2 children, Randy and Lynn. Junior was a farmer for almost the entirety of his life and was literally born in the same house that he lived in until his move to Galena Stauss. When he wasn’t milking cows, hunting, bailing hay or tinkering on farm machinery, he most likely had a fishing pole in his hand or was trying to invent a way for some gadget to work better than it was originally intended. When he “retired” he looked forward to fishing with his buddies at Apple Canyon Lake every other Monday in the summer. A fish fry with bluegills (more delicious than any you have ever tasted), chips, adult beverages and Wayne’s brownies would follow then after that many games of Euchre. Junior loved to tease and tell stories. He was a loving husband, father, grandfather and a caring friend. He was totally devoted to his 2 great grandson’s, Owen (5) and Ivan (2) and made sure that no matter what those 2 rascals did, they did NOT get in trouble at Papa’s house. Junior is survived by his 2 children, his son Randy Shaw (fiancée Mary Amici Kozi) and daughter Lynn Kay (Lynn Allen) Pease, 5 spoiled grandchildren Bill (Katie) Longmore, Jessica Pease (Ben Drury), Michael Pease, Derek Pease and Sandy (Wes) Offenheiser, his right hand for many years. He is also survived by 4 “can do no wrong” great grandsons Landis and Jerry Longmore and Owen and Ivan Offenheiser. Junior was preceded in death by his parents and his side kick of 63 plus years, Glynn Ellen who passed on June 13, 2017. He would also want us to mention the fishing buddies who went before him. There is no doubt he and Glynn have already hosted a heavenly fish fry and card party. Visitation will be Tuesday, June 21 from 4 – 6 pm at Law Jones Funeral Home in Elizabeth and from 10 – 11 am on Wednesday June 22 at First United Methodist Church in Elizabeth with the service to follow at 11 am. Junior’s family would like to thank the amazing staff at Galena Stauss Senior Care Center and Dubuque Hospice. Each and every one of you were special to him and treated him like a king. We also want to thank the care givers that helped us keep him at home as long as possible – Amy, Kara, Kris, Margo, Megan and Patti. He loved you all. Thanks.

Glen L. Shaw Jr., 88, Elizabeth, snuck away from us peacefully on Friday, June 17th, 2022 at Galena Stauss Senior Care Center, his home for the past 8 months. He had loved ones and caring staff at his side. Glen (Junior) was born March 2,... View Obituary & Service Information

The family of Glen L. Shaw, Jr. created this Life Tributes page to make it easy to share your memories.

Send flowers to the Shaw, family.