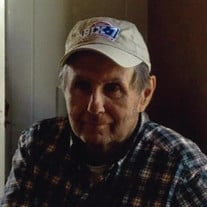 Gerard T. Wanzek, age 75, of Preston, IA, passed away in his home on Saturday, October 17, 2020. A funeral mass will be held at St. Joseph Catholic Church in Sugar Creek, IA, on Tuesday, October 20, 2020, at 11am. Visitation will take place from 9am to 11am, at the church. Burial will follow at St. Joseph Catholic Cemetery. Family and friends are invited to share in Gerard’s life at lawjonesfuneralhome.com. Gerard was born April 1, 1945, the son of Joseph and Mildred (Boehmer) Wanzek, Sr. After his time attending Sugar Creek Schools, Gerard went to work on the family farm. He worked that farm for his entire life, first with his father and siblings. During the ‘60s, Gerard served his country in the Army National Guard for 6 years. In 1974, Gerard and his brother Ray, and sister, Philomena took over the farm operations. That dairy farm (and later, stock cows) was at the center of Gerard’s life. He poured his heart and soul into it, and up until the day he died, he could be seen spending his time watching over it. Gerard was a long-time member of St. Joseph Catholic Church and the Farm Bureau. In his free time, he enjoyed playing euchre, and in his younger years, bowling. He loved watching the Chicago Cubs and Iowa Hawkeyes, and often took bus trips to the games. Gerard is survived by three brothers, Eymard (Donna) Wanzek, Sr., of Clinton, IA, Joseph (Joan) Wanzek, Jr., of Urbandale, IA, and Ray (Becky Banic) Wanzek, of Preston, IA; a sister, Jacinta (Steven) Clark, of Wichita, KS; a sister-in-law, Verna Wanzek, of Clinton, IA; and many nieces and nephews. Gerard is preceded in death by his parents, Joseph and Mildred; brothers, Bernard Wanzek and Francis Wanzek; sisters, Philomena Wanzek and Mary Wanzek; nephew, David Wanzek; and many aunts and uncles.

Gerard T. Wanzek, age 75, of Preston, IA, passed away in his home on Saturday, October 17, 2020. A funeral mass will be held at St. Joseph Catholic Church in Sugar Creek, IA, on Tuesday, October 20, 2020, at 11am. Visitation will take place... View Obituary & Service Information

The family of Gerard T. Wanzek created this Life Tributes page to make it easy to share your memories.

Send flowers to the Wanzek family.