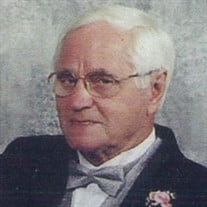 Gerald Bernard “Jerry” Swett, 92, of Hanover, Illinois, passed away on Wednesday, January 19, 2022, at his home. A funeral service will be held at 2:00 p.m., Monday, January 24, 2022, at Law-Jones Funeral Home, Hanover. Visitation will be held from 12:00 to 2:00 p.m., prior to the service at the funeral home. Burial will take place in Evergreen Cemetery, Hanover. Online condolences may be left for the family at www.lawjonesfuneralhome.com Jerry was born August 14, 1929, in Thomson, Illinois, the son of Leaman and Lena (Atherton) Swett. He graduated from Hanover High School with the Class of 1947. Jerry was united in marriage to his high school sweetheart, Jeannine Morrison on August 29, 1948, at the First Presbyterian Church, Hanover. Jerry was a loving husband to his wife of 73 years. They were blessed with one son, Steven. Jerry enjoyed and loved his family, his home, and couldn’t spend enough time working in his garden and yard. He was always ready to play a game of euchre and enjoyed their “Couples 500” club. He also loved to play golf, every hour, every day, all day if possible. He had many happy times when he was camping with his family and his cocker spaniels, Lucky and Ginger at Timber Lake Resort in Mt. Carroll and Seven Eagles Campground & Resort in Savanna. Jerry worked for many years at, and retired from, the Savanna Army Depot as a mechanic, in the fire department, and at the Special Weapons Department. He was a member of the Hanover Volunteer Fire Department for many years. He was a member of the Galena Elks Club and the Savanna Moose Lodge. Those left to cherish his memory include his wife, Jeannine; a son, Steven and his wife, Debbie; three grandchildren, Kimberly, Steven Jr., and Robert “R.J.” Swett; five great-grandchildren, Adelyn, Tyler, Landen, Caleb, and Hayden Swett; his sister, Norma Lehr; brother-in-law, Gary Lehr and their family. Jerry was preceded in death by his parents, Leaman and Lena Swett; mother-in-law, Hazel Gray; father-in-law, Elias Morrison; three sisters, Hazel Diestelmeier, Betty Traum and Jeanne Harris; one brother, Harold Swett; and his two beloved cocker spaniels, Lucky and Ginger. Jerry’s family would like to extend a special thank you to St. Croix Hospice for their care and compassion. To Jerry’s caregivers, Vicky and Sherry for their faithfulness, and loving care for Jerry and also to Donna, Allen, Mary and Mary Jo for all of their support.

The family of Gerald Bernard "Jerry" Swett created this Life Tributes page to make it easy to share your memories.

Send flowers to the Swett family.