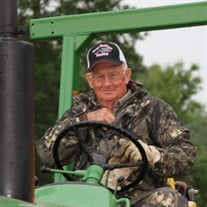 Gerald Dale Smithson passed away on Saturday, April 16, 2022 at MercyOne Medical Center in Dubuque, Iowa. A Funeral Mass will be held 10:00 a.m. Friday, April 22, 2022 at St. Joseph Catholic Church in Preston. Burial will be in St. Joe’s Catholic Cemetery, Preston. Visitation will be held from 4:00 – 7:00 p.m. Thursday, April 21, 2022 at St. Joseph Catholic Church, Preston. Gerald was the oldest born to William and Lois (Barten) Smithson on June 23, 1935 in Jackson County. He attended the Spunky Ridge/ Washington #3 one-room school house, and graduated from the Miles High School with the Class of 1952. On September 14, 1957, Gerald married Elaine Henningsen at St Joseph Catholic Church in Preston, IA. They raised four children, Deb, Tracy, Doug and Steve, and celebrated 64 years of marriage. Gerald farmed all his life with a true passion of working with cattle. He held every office in the Jackson County Cattlemen and was inducted into the Hall of Fame in 2011. Using his own feedlot cattle, Gerald was awarded the Grand Champion Car-Lot Pen of 15 Angus Cattle in 1972. He served as a 4-H leader for the Preston Calf Club. When Gerald and Elaine moved to town he still wouldn’t retire, he began his own trucking company, hauling for many farmers. He made many lifetime friends while he was trucking. In 2014, Gerald handed the reigns of the business over to his son Steve. His greatest pleasure in life was working with, and later watching his cow/calf operation. Even in his last days, Gerald took the Ranger out to check his cows daily. He enjoyed being part-of and riding in the WMT Tractorcade with his son Doug. He loved attending his grandkid’s sporting events, liked playing cribbage, and couldn’t wait when there was a B&G Auction. Gerald will be dearly missed by his wife, Elaine; two daughters, Deb (Duane) Gannon of Dewitt and Tracy (Randy Wald) Smithson of Savage, MN; two sons, Doug (Shelly) Smithson of Preston and Steve (Terri) Smithson of Miles; 7 grandchildren; 7 great grandchildren (plus one due in June); two fury friends, Ella and Reba and a brother, Wilfred (Phyllis) Smithson of Bellevue. Gerald is preceded in death by his parents; a brother David; and a grandson Colin.

The family of Gerald Dale Smithson created this Life Tributes page to make it easy to share your memories.

Send flowers to the Smithson family.