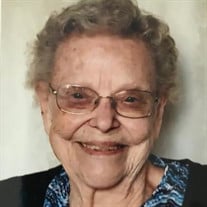 Georgiana Handel, age 97, of Mt. Carroll, previously of Savanna, passed away Tuesday, June 22, 2021 at Allure Nursing Center in Mt. Carroll. A funeral service will be held 11:00 a.m. Friday, June 25, 2021 at St. Peter Lutheran Church, Savanna with Reverend Dan Foelske officiating. Burial will be in St. Peter’s Cemetery, Savanna. Visitation will be held from 10:00 – 11:00 a.m., prior to the service on Friday at the Church. Georgiana was born October 9, 1923, in Savanna, Illinois, the daughter of John and Anna (Beyer) Wurster. She graduated from Savanna High School. Georgiana then attended the Molin Public Nursing School and became a Registered Nurse. On October 11, 1947, Georgiana married Carl John Handel. They raised three children, Cheryl, Jon and Carl, Jr., and they celebrated 62 years of marriage until Carl’s passing in 2010. Georgiana worked at the Savanna City Hospital. Her passion was working in the maternity ward. She also worked for Dr. Piper in Mt. Carroll for several years. She was a member of St. Peter’s Lutheran Church in Savanna and the “Washington Club,” getting together monthly with neighbors in the country. Most of all, Georgiana loved the time she spent with her family, especially the grandchildren and great-grandchildren. Georgiana will be dearly missed by her daughter, Cheryl (John) Laatsch of Jefferson, Wisconsin; two sons, Jon Handel and Carl John (Patricia) Handel, both of Rockwood, Illinois; 6 grandchildren and 3 great-grandchildren; two sisters, Virginia Woldow of San Jose, California and Patsy Helmich of Davenport, Iowa. Georgiana is preceded in death by her parents John and Anna, and husband Carl, Sr.

The family of Georgiana Handel created this Life Tributes page to make it easy to share your memories.

Send flowers to the Handel family.