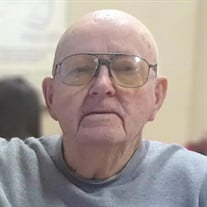 George H. Schall, age 88, of Freeport, IL, formerly of Mt. Carroll, IL, passed away Saturday, March 7, 2020 at Allure Nursing Home in Mt. Carroll. A private family memorial will be had in his honor. Family and friends are invited to share in George’s life at lawjonesfuneralhome.com. George was born May 14, 1931, in Mt. Carroll, IL, the son of William and Bertha (Kraus) Schall. He attended Mt. Carroll schools, and graduated from Mt. Carroll High School with the class of 1949. On November 2, 1952, George married Virginia Walter at Lanark Methodist Church. They went on to have a son and two daughters. George spent most of his life working his and Virginia’s family farm. However, always known for his work ethic, he usually took on other work as well. He worked with Glen Smith, painting and decorating interiors, spent a couple years as a custodian for the Mt. Carroll school district, and had multiple factory jobs, most recently with Elkay. His factory friends would often joke with him to take it easy, because he was making the rest of them look bad. A trapper, hunter, and fisherman, George was a true outdoorsman. If it involved the outdoors, he tried it! His family will always treasure memories of their camping trips, and how George involved them in the things he loved. One fond memory involved George pulling the grandkids on a tube behind the tractor, in the snow. Though Virginia had her worries at the time, she can now look back and laugh. Family was life to George, and his devotion as a husband, father, grandfather, and great grandfather, proved this every day. George will be dearly missed by his wife Virginia, of Freeport, IL; his daughters, Karen (Michael) Reynolds, of Berea, KY, and Teri Schall, of Yuma, AZ; daughter-in-law, Kathy Schall, of Mt. Carroll, IL; seven grandchildren, Elizabeth (Tony) Timm, Amanda (Steve) Honchell, Robert (Bill Lombardi) Schall, Bryan Reynolds, Michelle (Randy) Robinson, George (Annette) Stutzman and Crystal Dawn; nine great-grandchildren, Roman, Jessi, Jenni, and Nathan Timm, Katie and Nikki Honchell, Gage and Rook Robinson, and Alison Stutzman; 3 nephew, and a niece. George is preceded in death by his parents, William Schall and Bertha Schall-Turnbaugh; his brother, and two sisters; son, William Schall; and great-grandson, Zackary Timm.

George H. Schall, age 88, of Freeport, IL, formerly of Mt. Carroll, IL, passed away Saturday, March 7, 2020 at Allure Nursing Home in Mt. Carroll. A private family memorial will be had in his honor. Family and friends are invited to share... View Obituary & Service Information

The family of George H. Schall created this Life Tributes page to make it easy to share your memories.

Send flowers to the Schall family.