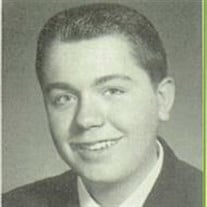 George Kaspar, age 77, of Mt. Carroll, previously of Blue Island, passed away Friday, April 23, 2021 at CGH Medical Center, Sterling, Illinois. A funeral service will be held 11:00 a.m. Friday, April 30, 2021 at the Law-Jones Funeral Home, Mt. Carroll. Visitation will be held from 10:00 – 11:00 a.m., one hour prior to the service. George was born May 7, 1943 in Chicago, the son of George and Agnes (Starr) Kaspar. As a young boy, he lived at Mooseheart, then attended and graduated from Eisenhower High School in 1961. George went to work right out of high school for Bagcraft in Chicago. This is where he met the love of his life, Sharon Dymon. They were married August 20, 1966 in Chicago, and went on to raise a son, Bill, and celebrated 54 years of marriage. They weren’t only husband and wife, but best friends too. George worked 42 years at Bagcraft before retiring when he and Sharon moved to Mt. Carroll. It is in the country where he found his enjoyment of fishing and being outdoors. He enjoyed going on annual fishing trips to the boundary waters in Canada and telling a good story. George will be dearly missed by his wife Sharon of Mt. Carroll and his son, Bill of Galesburg. He is preceded in death by both parents; two sisters, Darlene Rudowski and Pat Jesernig; two brothers, Jim and Dick Kaspar; and his step-father, Red Goodin.

The family of George Kaspar created this Life Tributes page to make it easy to share your memories.

Send flowers to the Kaspar family.