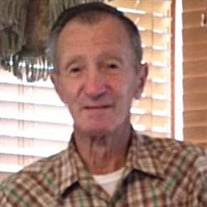 Gary Lee Law, age 82, of Savanna, Illinois, passed away peacefully on November 1, 2020. Gary will be laid to rest at Zion Cemetery west of Mount Carroll, Illinois. Gary was born on February 10, 1938, in Savanna, and was one of 3 children born to Wade and Viola (Bailey) Law. Gary’s father, Wade, passed when Gary was just 17. At 16, Gary began working for the Chicago, Burlington & Quincy Railroad, sweeping snow from switches, although yard crews often kept Gary inside the locomotive to keep him warm. When Gary wasn’t working, he was usually with his buddies, including Boyd Beck. In fact, Gary was downtown with his friends when he met his future wife, Judith Ann (Curley) Law from Hanover, IL. Judy and her childhood friend, Pat Mullane, also from Hanover, had come to Savanna to go to the movie theater. Gary was a member of the St. Paul Lutheran Church of Hanover, and this is where he and Judy were married on July 12, 1958. As a young man, Gary worked for Alden & Dauphin Standard station in Savanna. In 1962, Milwaukee Road Master Mechanic Dean Radabaugh came to the station, reporting that his car had broken down north of town. After towing the car to the station and examining it, Gary replaced the engine points and had the car running smoothly by the time Mr. Radabaugh returned from lunch. Mr. Radabuagh was thrilled and told Gary he could hire him at the Milwaukee Roundhouse in 3 months. Station owner Fred Dauphin told Gary “You better take that job!” Gary became a licensed diesel machinist and roundhouse foreman for the Milwaukee Road, keeping many locomotives pulling Milwaukee Road trains. Gary will be dearly missed by his wife Judy of 62 years; 5 sons Gary Scott (Robin) Law and Jeffrey (Rhonda) Law of Savanna, Todd (Dora) Law of Hampshire, IL, Shawn Law of Bellevue, IA and Chet Law of Savanna; 9 grandchildren; 7 great grandchildren; 3 siblings; Janet Maggio of Largo FL, Harland (Ruby) Law of Savanna and Bob (Sheri) Law of Wacker. Gary was preceded in death by his parents, Wade and Viola; half-

Gary Lee Law, age 82, of Savanna, Illinois, passed away peacefully on November 1, 2020. Gary will be laid to rest at Zion Cemetery west of Mount Carroll, Illinois. Gary was born on February 10, 1938, in Savanna, and was one of 3 children born... View Obituary & Service Information

The family of Gary L. Law created this Life Tributes page to make it easy to share your memories.

Send flowers to the Law family.