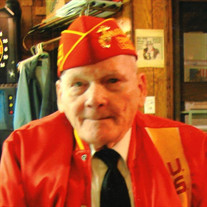 Frederick (Rocky) James Bess of 421 Chicago Avenue, Savanna, Illinois, died at home, in the care of his loving wife, on April 8, 2020, at age 94. He was accorded the rites of cremation by Law-Jones Funeral Home and his cremains will be interred in the New Spring Lake Cemetery. A private service will be held at a later date. He was born on March 27, 1926, to Lilly Mae Pengra and Frederick Walter Bess in Bluff Siding, Buffalo County, Wisconsin, the eldest son of 9 children. He attended a one-room school through 8th grade and graduated in 1943 from Winona High School in Winona, Minnesota as an honors student. He enlisted in the United States Marine Corps after graduation and served overseas in the South Pacific at Guam and Iwo Jima during WWII. Corporal Bess was honorably discharged in April 1946 at Bainbridge, Maryland. It was in the military he acquired the nickname “Rocky”. After the war, he worked in La Crosse, Wisconsin as a produce manager and apprentice butcher before launching a 35-year career with the telephone company. Fred started as a lineman, installer and trouble shooter at La Crosse Telephone Company and was transferred to Mount Carroll, Illinois, in 1952. He was a manager there and later in Savanna until his retirement in 1982 from Centel. Rocky married Marjorie Jean Pennebaker of Ottawa, Illinois in 1948. There are three children from the marriage: Roderick James (Jill) Bess and Penny L. Thacher of Mount Carroll, Illinois and Kathy Jean (Michael) Bausman of Kewanee, Illinois. In 1979, Rocky married Jeanne Anne Thompson Thulion of Savanna and joined what he called “the best second family ever”; his stepchildren Barbara A. (Dennis “Mac”) McFaddon, Janice E. (Mark) Schoening and Ronald L. (Maria) Thulion of Savanna. He is survived by one brother, Rodney (Diane) Bess, Genoa, WI, one sister, Lillian Karbula of La Crescent, MN, his three children, his wife, Jeanne, his three stepchildren, 11 grandchildren and 20 great-grandchildren. Rocky was predeceased by his parents, three sisters, three brothers, a granddaughter, and one great-grandson. Rocky was an avid reader, especially fond of Westerns. In his younger years he enjoyed fishing, hunting, golfing, bowling, gardening and playing cards. He was active in the community as a Sunday School teacher, youth baseball volunteer and scout leader (He said, “God Bless all den mothers!). Rocky was a member of the Lions Club, a volunteer firefighter, and 70-year member of the American Legion, where he served as chaplain and commander. Rocky was a life member of the VFW 2223 and served on the honor guard until his health prevented him. Rocky was proud that he, all four of his brothers, five brothers-in-law, one uncle, three cousins, and one niece served their country in WWII, Korea, Vietnam, and Iraq. A proud marine has died today. Rocky will be missed by his family and friends. From one of his favorite poems, Robert Louis Stevenson's Requiem, “This be the verse you grave for me: Here he lies where he longed to be, home is the sailor, home from the sea, and the hunter home from the hill.”

Frederick (Rocky) James Bess of 421 Chicago Avenue, Savanna, Illinois, died at home, in the care of his loving wife, on April 8, 2020, at age 94. He was accorded the rites of cremation by Law-Jones Funeral Home and his cremains will be interred... View Obituary & Service Information

The family of Frederick "Rocky" James Bess created this Life Tributes page to make it easy to share your memories.

Send flowers to the Bess family.